What is the future of F1? 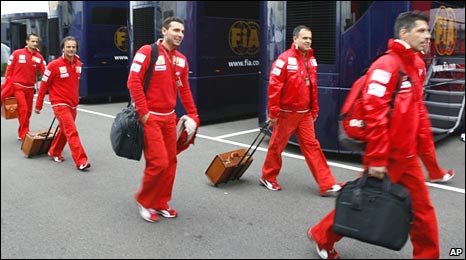 So… Bernie and Max have finally done it… they’ve pushed the teams so hard that they’ve gone away and formed their own series!

With 2 of this years teams (Williams and Force India) being the only ones that have signed unconditional entries to F1 2010, it looks like F1 popularity will plummet and the new FOTA backed series will rise up.

It’s not the first time that this has happened in a major sporting series… look back to Indy cars in America… there was a split there in to 2 separate series.

Although I’m unsure of where things will go, I’m sure that FOTA have a lot of peoples interests at heart, with the official statement reading…

“The teams cannot continue to compromise on the fundamental values of the sport and have declined to alter their original conditional entries to the 2010 World Championship,” said a statement issued by FOTA after the meeting.

“These teams therefore have no alternative other than to commence the preparation for a new Championship which reflects the values of its participants and partners. This series will have transparent governance, one set of regulations, encourage more entrants and listen to the wishes of the fans, including offering lower prices for spectators worldwide, partners and other important stakeholders.

“The major drivers, stars, brands, sponsors, promoters and companies historically associated with the highest level of motorsport will all feature in this new series.”

There could be some confusion though with Ferrari, Red Bull Racing and Scuderia Toro Rosso with the FIA claiming that they have contract for next year.

If this all goes ahead like planned I think there could be a possibility that there will be a return to Silverstone again for the British GP (In the new series), and we will hopefully see some of the older and more exciting tracks reappear rather than Bernie running around with a chequebook in the Middle East!

I guess all of this will leave Force India a chance to finally get on the podium though!!