The Britcar GT Championship leaders Witt Gamski and Keith Robinson, took an impressive pole position this morning in qualifying for the four hour race at Snetterton.

Gamski and Robinson set a time of 1:08.037 in their MJC Ltd Ferrari F430 GTC around the 1.95 mile Norfolk Circuit. Their margin to second placed Aaron Scott and Arwyn Williams was 0.753 of a second who are also in a Ferrari 430 run by JMH. Third spot on the grid will be taken Glynn Geddie and Jim Geddie in the Apex Tubulars run Porsche 996RSR. Many will know Glynn from the Porsche Carrera cup of Great Britain which runs alongside the BTCC.

Scott and Williams had set the fastest time in practice first thing this morning and improved that time in qualifying. However, this was not enough to beat the super fast Ferrari of Gamski and Robinson who only took to the practice session for 5 laps and were well down the timesheet in 16th.

The two Topcat Racing Marcos Mantis' of Neil Huggins and Raphael Fiorentino in the number 26 car and Owen O'Neill and Jon Harrison in the number 36 car will be disappointed qualifying in sixth and tenth respectively after setting good time in practice. Another team who will feel disappointment will be the GTF Racing team running a TVR Sagaris driven by Tim Hood, Fred Tonge and Darren Dowling. The set the third fastest time in practice, but failed to match it in qualifying leaving them down in eighth on the grid.

The Production Class will also line up on the grid with the GT's this afternoon but will only be running for 2 hours. It's currently tight at the top of the championship standings in  this category with only seven points separating the top six. 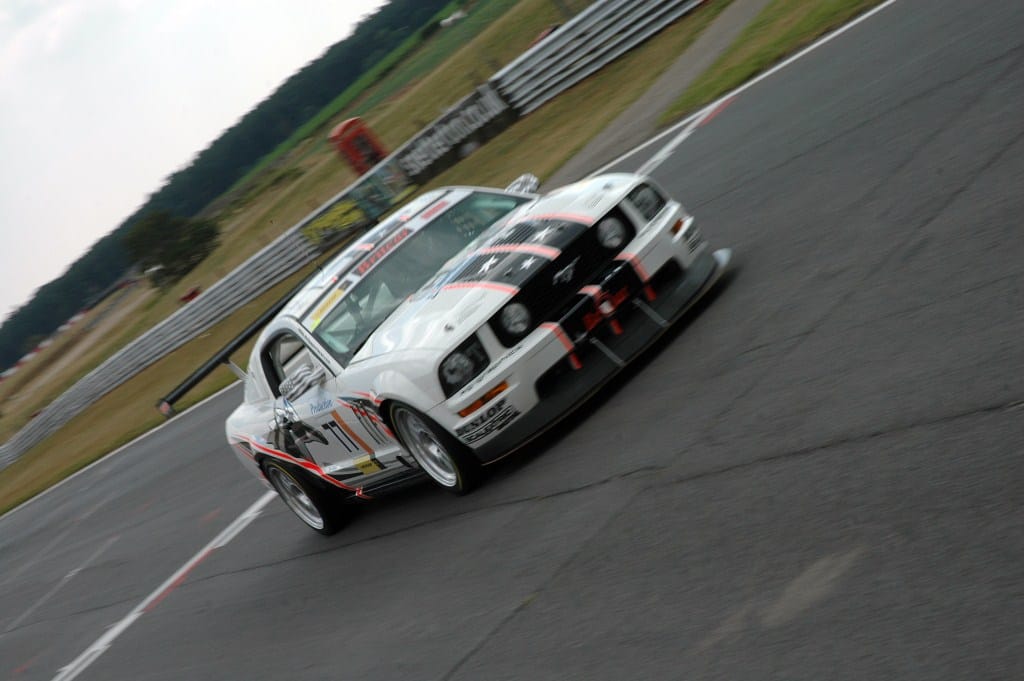 The Mustang of Stuart Scott, Mike Jordan and Steven Wood

Production Class leaders Ian Lawson, Mike Wilds and Anthony Wilds start a disappointing 11th in class and 28th overall. They set a time of nearly nine seconds off the fastest car, that of the Ford Mustang FR500GT of Eurotech Racing driven by Stuart Scott, Mike Jordan and Steven Wood. Jordan, father of Touring car ace Andy, didn't take part in qualifying as he was racing at Silverstone this morning before heading to Norfolk for the race this afternoon.

Gino Ussi in the Geoff Steel Racing BMW E46 M3 took the second fastest class time and The Ginetta G4 of Mike Mercer and Gary Smith round out the top three.

It was a bad qualifying for Bernard Hogath and Marcus Hogath in the Technosport Seat SuperCopa. An Oil fire in the engine put an end to their session before even setting a time which leaves them at the back of the grid.

There are two Mazda MX5's taking part today as a special initiative set up by the Japanese make to celebrate the 20th anniversary of the iconic MX5. These will be driven Owen Mildenhall and Mark Ticehurst in the number 53 car and David Hooper and Jade Pavely, who takes part in her first ever race event in the 54 car. They will start 30th and 32nd respectively.

33 cars line up at the start this afternoon for what looks set to be an action packed race.