Paul di Resta scored his third victory in as many races to take the lead of the DTM standings from Mercedes teammate Bruno Spengler, who retired from the ninth race of the 2010 season at Hockenheim.

The safety car made an appearance at the end of the first lap after a multi-car collision at the Turn 4 'shortcut', triggered when Spengler missed his braking point for the corner, clipping the Audi of Miguel Molina. Molina ended up in the gravel on the outside of the corner, where Ralf Schumacher ran into him before spinning back onto the track, into the path of Katherine Legge and David Coulthard. Markus Winkelhock ended up running into Molina, having been hit by Mattias Ekstrom. Schumacher, Legge, Molina and Winkelhock retired on the spot, while Coulthard retired to the pits. Franky Cheng sustained damage in contact with Coulthard, and also retired. Ekstrom pitted to try to repair his damage, but was forced to retire a few laps later.

Most of the leaders pitted between laps 13 and 16, but di Resta stayed out to take up the lead of the race, waiting until lap 26 to stop, just as the likes of Paffett and Rockenfeller were making their second stops. This allowed di Resta to move up to second behind Scheider, who soon stopped. When di Resta pitted for the second time on lap 34, he rejoined in the lead, just ahead of Scheider.

Di Resta held on to take his third win in a row, ahead of Scheider and Rockenfeller. Paffett finished fourth, ahead of Audi drivers Martin Tomczyk and Oliver Jarvis, who endured a race long scrap. Susie Stoddart finished in seventh, ahead of Jamie Green, who was handed a drive-through penalty for clashing with Premat in the first set of pitstops. The damage caused Premat to retire his Audi. Maro Engel was the ninth and final finisher, a lap down. Spengler was forced to end his race on lap 23 with suspension damage.

The win puts di Resta into the lead of the championship with two rounds to go and three points in hand over Spengler. Paffett remains in the hunt, a further 11 points behind, while Ekstrom's retirement ended his, and Audi's, title hopes.

Di Resta said after the race: “Today, it was a surprising victory. The start wasn't great, but the car was unbeatable and the speed was simply incredible. Fortunately, I was still able to catch Timo Scheider. Of course, finishing in front of him was particularly important. We hope that we can now stay on top. It is quite a close call between Bruno and me. However, I am now full of confidence and I will do my best” 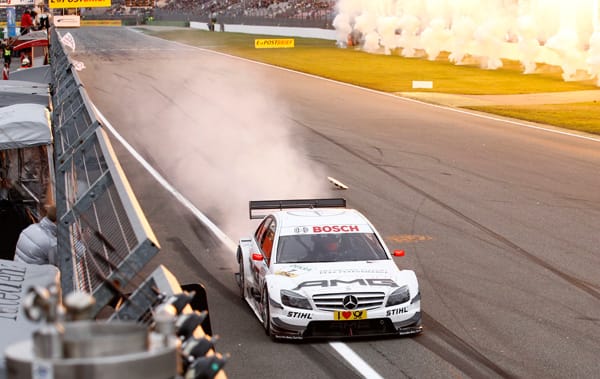 Di Resta brought his Mercedes home to another victory

Scheider said: “Second place in the last round of the season in Germany is all right. Of course, I had hoped for more. But you can't wish anything in motorsport, where performance is the only thing that counts. For next year, we have to keep the performance from the last couple of races.”

Mercedes-Benz motorsport head Norbert Haug said: “This success really makes us feel well. We had a perfect strategy and we witnessed a very exciting race. Now, we know that we will win the title. However, I think that we will only find out in Shanghai who will be the new DTM champion. We will have a small party tonight, though.”

Audi's Wolfgang Ullrich said: “After Ekstrom had retired, it was clear to us that we wouldn't be able to go for the title anymore. We still had hopes of winning the race. At the start of the season, we had a good performance, but we have given away too many points. Halfway through the season, we had a low in which the performance wasn't right. Now, we are back at the right performance level again.”

The penultimate round of the season takes place at Adria, Italy on October 31.