Denny Hamlin‘s dominant race at Phoenix was thwarted by a necessary fuel stop allowing Carl Edwards through to win his second race of the weekend, following Saturday’s win in the Nationwide race, and break his seventy race winless streak in the NASCAR Sprint Cup Series.

Hamlin’s no.11 FedEx Toyota led for 190 of the 312 laps and was clearly the class car of the field but a yellow flag caution period on lap 224 gave a lot of the drivers hope to make it through to the finish even though an eighty-eight lap run was beyond the normal fuel mileage of the cars. A six lap caution a few laps later helped their cause but whilst all of them were driving in fuel saving mode nobody though to tell Hamlin. His hopes and prayers that a further caution would be called went unanswered and with fourteen laps to go he had to stop to top up, changing two tyres whilst he was there.

Hamlin rejoined the fray in 19th place and one lap down and drove flat out to the flag unaware that his main competitors were all aiming to finish without any more fuel stops. He got himself back onto the lead lap and fought his way to twelfth at the finish only to be told by Mike Ford, his crew chief, on the slow down lap that both Jimmie Johnson and Kevin Harvick had made it to the end non-stop and had thus reduced the points deficit to him in the title race. Before his splash-and-dash stop he had been over sixty points clear of Johnson, now there was just fifteen points in it as they head to the finale at Homestead-Miami next Sunday.

No words could express Hamlin’s feelings as eloquently has his actions, punching the dashboard twice and later, sat disconsolantly on the pit wall, throwing a bottle of drink away with some anger. He’d had the upper hand within his grasp and now, with a fuel mileage he just could not comprehend, he had to face a winner takes all scrap for the championship.

Hamlin said in an interview afterwards, “I will leave Phoenix in Phoenix. When I get home I will be planning next week. I know I couldn’t control this, I did all I had to do.” 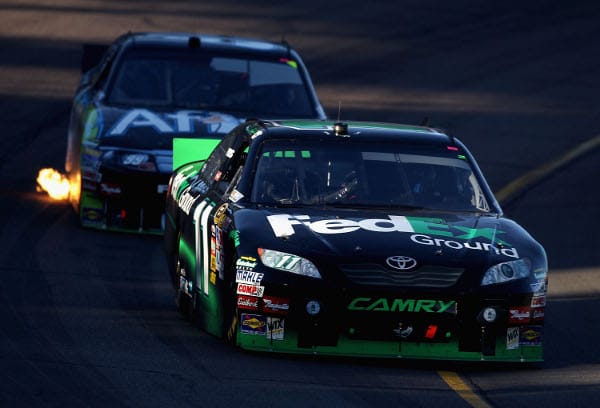 Hamlin led for most of the race, only for a late fuel stop to drop him down the field

Kevin Harvick was another driver who could consider himself lucky in this race – his crew chief admitted to ducking a bullet here. He smacked the outside wall early in the race but got away with it being a fairly glancing blow. Potentially more damaging was his call to return to the pitlane on lap 226 to replace a missing lug (wheel) nut. The crew took the opportunity to fuel up and that, together with the later caution period meant the #29 Shell Chevrolet was never concerned about fuel mileage and Harvick finished in a strong 6th place, one spot behind Johnson.

Unlucky was Juan Pablo Montoya who started the penultimate lap in fourth but ran out of fuel to come home in sixteenth place. Another to suffer misfortune was Brad Keselowski who hit the wall hard enough to leave his car stranded in the middle of the track after a tyre blew out.

It would be wrong to suggest, though, that Edwards lucked into his win. He had passed Hamlin before the latter needed his final fuel stop and had been strong most of the weekend, both in the Nationwide race and in practice and the race for the Sprint Cup where he spent most of the race in the top three. His long overdue win strengthens his fourth place in the standings.

Edwards performed his usual backflip after the win but has added to his post race rituals with another climb into the spectator area to share his win – and his joy – with the paying public. Edwards, more than any other driver in NASCAR, shows only too clearly that the fans matter to him enormously and is always ready to give something back to them. Just a little detail, but when he is interviewed he is probably the only driver who always removes his sunglasses so that you can see his eyes. Sometimes it’s the little things which matter.

So, next Sunday we have a three driver shoot-out for the Sprint Cup Series championship title. Hamlin leads Johnson by those fifteen points with Harvick just a further 31 points back. It is out of the latter’s hands as he needs Johnson to be fourth or lower and Hamlin seventh or lower before he can stand a chance of taking the title. For the other two there are too many permutations to count but the bottom line is Johnson needs to be three or four places ahead of Hamlin or just a couple if the #48 leads most laps. And Hamlin, of course, ideally just wants to finish in front of both of his competitiors to seal the deal.

The reality is, though, that all three will really need to race for the win to be certain of taking the title. It’s going to be some race.

By Justin Nguyen
7 Mins read
From Paul Menard in his first race since 2019 to Kevin Harvick, from the bevy of sports car stars to the reigning Xfinity champ, NASCAR’s COTA weekend has a multitude of unique entries in store.
NASCAR Cup Series

Justin Haley to miss Dover due to COVID-19, Josh Berry and Zane Smith filling in

By Justin Nguyen
3 Mins read
Due to COVID-19 protocol, Justin Haley will have to miss this weekend’s NASCAR Xfinity and Cup races at Dover. Zane Smith replaces him for the former while Josh Berry will make his début in the latter.