Elena Myers Stars In MotoGP Run Out At Indy

Elena Myers was beaming after getting the opportunity to ride Rizla Suzuki's MotoGP machine around the Indianapolis Motor Speedway on Thursday.

The 17 year old, who competed for Team SuzukiScoopFans in the AMA Pro SuperSport West Division this year, was the first female rider ever to win a race in AMA Pro Racing's 76 year history, and the impressive start to her career earned her the chance to run a Grand Prix bike for the first time.

Myers impressed the team with her smooth and assured riding style during the five lap run, clocking 306km/h on the main straight at one point. She was watched by regular MotoGP racer Alvaro Bautista and a number of other Grand Prix stars as she put the GSV-R through its paces, with the Spaniard also offering the California youngster advice before taking to the track.

Myers paid tribute to the Rizla Suzuki team for offering her such a dream opportunity and added that the experience has motivated her to reach the pinnacle of motorcycling in the future.

“Wow! I can’t really say anything else; it was just such an incredible experience! I can’t thank the guys at Suzuki MotoGP enough – they have been awesome! This makes me so hungry to come out here and try it someday for real on a race weekend: Well I guess this is a race weekend, but I mean for real next time. I can’t say enough about the bike either; it does everything 20 times better than I ever would have imagined – this has just been amazing and I think I’ll slowly realise what just happened over the next couple of days. The GSV-R just blew me away!” 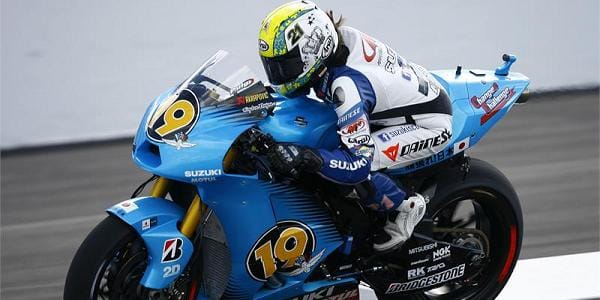 Elena Myers lapping the Indianapolis Motor Speedway on the GSV-R

Team Manager Paul Denning was delighted to give Myers the chance to sample the 800cc machine and expects her to have a bright future after the potential she showed on Thursday.

“It was great to see Elena out on a MotoGP bike and very cool that – as the Suzuki MotoGP team – we could help her fulfil one of her dreams. At 17-years-old, and judging by her performances in the AMA Pro SuperSport championship, she has a significant amount of ability that is only going to develop as she gains experience. She treated the run today with great intelligence and maturity, but nonetheless it was impressive to see that she wasn’t afraid of either the speed or the power!”

“Thanks to the Indianapolis Motor Speedway for helping us to make this happen, the boys for preparing the bike and to Alvaro for letting Elena use it!”