All Gamer Line Up To Tackle Dubai 24 Hours

The winners from the first three years of the Playstation Nissan GT Academy will team up to form a four man team to take on the Dubai 24 Hours.

The race drive is the main prize for 2011 winners Jann Mardenborough and Bryan Hietkotter. 20-year-old Mardenborough beat 90,000 Gran Turismo 5 gamers from 10 European countires to become the first British winner of the competition after a Race Camp programme that culminated in three days at Silverstone.

Joined by Heitkotter, winner of the US GT Academy competition the pair, were entered in races at national level – including October's Britcar 24 Hours in order to qualify for the their race licences. As well as the continued race development the pair have taken part in sessions with race instructors and karting to help hone their race craft skills. They have also endured gruelling physical training, which included running the New York Marathon.

“This was the most comprehensive and intensive driver training programme to date in GT Academy and a fantastic opportunity for Jann,” Darren Cox, Nissan International's European chief marketing manager for sports cars. “We planned every detail to make sure that it was not just a case of him being 'qualified' to race in Dubai, but that he is a fully-rounded package capable of challenging for a strong finish alongside all of the other winners of GT Academy. Is it a risk to have four drivers in the same car when even the most experienced had never raced before 2008? Definitely not. They said we were crazy when we launched the programme and the GT Academy team keep proving the doubters wrong. All eyes will be on them again in Dubai and they won't let Nissan or PlayStation down.”

For the Dubai 24 Hours (January 12-14) the pair will be teamed with Lucas Ordonez, winner of the first Playstation Nissan GT Academy who has progressed – with Nissan – all the way to the Intercontinental Le Mans Cup where he secured Rookie Of The Year honours in 2011 as well as winning the LMP2 class with the Signatech Nissan team. 2011 Blancpain Endurance GT4 Cup champion Jordan Tresson who won the 2010 GT Academy.

The quartet – driving a 410bhp Nissan 370Z – will be the first all-gamer team to tackle the endurance event. 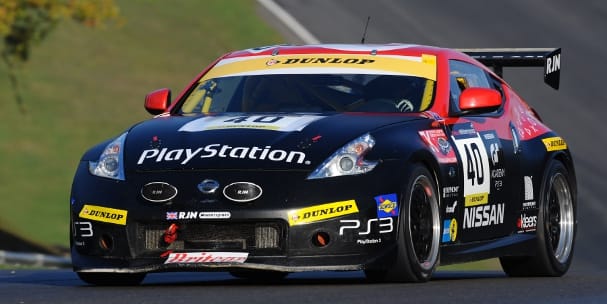 The foursome will drive a Nissan 370Z in Dubai

“It will be an exciting day for me on 13th January when the Dubai 24 Hour race gets underway with a team full of GT Academy champions,” said Gran Turismo creator and president of Polyphony Digital Kazunori Yamauchi. “In the past few years a lot of top works teams and famous drivers have raced in Dubai. The success of the GT Academy programme since its debut in 2008 means that they will not take the challenge of the GT Academy Nissan 370Z lightly. The motor sport world certainly took notice of the raw talent that has emerged from Gran Turismo through our GT Academy partnership with Nissan when Lucas stood on the podium at Le Mans. In Dubai we shall give them even more to think about.”