With just days remaining before the start of the new MotoGP season, The Checkered Flag is counting down all week to the curtain raiser in Qatar. In the first of our season previews, we look at the rider line-up for the new season and offer our predictions as the outcome of this year’s 18 race championship. 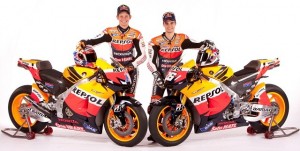 12 pole positions and ten victories demonstrate how dominant Stoner was in 2011. Even when Casey didn’t win, he still came out ahead and his relentless pace will make him tough to beat this season. His rivals may have been hoping for an uncompetitive 1000cc Honda as the rules change but they look set to be disappointed.

Many of the question marks that have surrounded the Spaniard in recent years refuse to go away. Blistering quick on his day, but increasingly fragile when he crashes. If Dani is ever to fulfil his undoubted potential, he must steer clear of injuries. A fully-fit Pedrosa has what it takes to push Stoner all the way.

Lorenzo’s title defence was always going to be tough as Honda left Yamaha trailing in the winter of 2010. In 2011, Jorge produced results the YZR-M1 shouldn’t have been capable of, including a memorable win at Mugello, and with the 1000cc Yamaha looking promising, he has a real chance of regaining the #1 plate.

2011 was a breakthrough year for Spies who built on an impressive rookie season by winning his first grand prix at Assen while Valencia should’ve brought a second. The task for Spies is to leap into championship contention but my feeling is that if the Yamaha is good enough, Lorenzo will be the one to carry their title challenge.

Few riders, if any, are under as much pressure as Valentino Rossi this year. The Italian dream team failed to deliver a victory in its first year and big things are expected of the Ducati GP12. While it appears to a step forward, the new bike doesn’t look quick enough to give Rossi any chance of adding to his seven premier class titles.

With all the focus on Rossi, few appreciated how well Nicky Hayden rode last year. The 2006 world champion kept his head down while new parts were constantly added to his teammate’s bike and by the end of the year, Nicky was just seven points behind. However quick the Ducati proves to be, Nicky will do it justice.

Bautista will be many people’s second favourite rider this season as he takes control of the Gresini Honda RC213V intended for the late Marco Simoncelli. Testing indicates he still has a long way to go before he is mixing it with the factory runners but expect him to move forwards as the season rolls on.

Pirro’s Moto2 win at Valencia was one of the most emotional moments in 2011 and his flawless victory earned him a ride on Gresini’s CRT machine. The Italian has only one year in the intermediate class under his belt and time will tell as to whether he’s good enough for the big league and more than just a sentimental pick.

Cal’s debut season ebbed and flowed but was ultimately successful. The Briton clinched the rookie of the year crown on the final lap of the year and must now take the next step, and lead the group of satellite riders. With 2013 signing Bradley Smith waiting in the wings, the times of racing without pressure on his shoulders have gone.

Solid if unspectacular would the best way to describe Dovizioso in MotoGP and last year was proof of that. The Italian was always in and around the top six and occasionally beat his daunting teammates. Unfortunately for him, failure to win with the best bike on the grid cost him his Honda contract and he will look to put himself back in the shop window with Tech 3.

With a best finish of sixth in two seasons, Barbera is a solid midfield runner but hasn’t managed to attract the attention of a top team. As in 2011, he will run as a sole rider within his team so it will only possible to measure him against the other satellite Ducati, and he should win that particular duel.

The best of the ‘Claiming Rules’ teams should be Aspar and with de Puniet on board, the Spanish squad will be hot on the heels of the satellite runners. The Jerez test showed that the Aprilia supported bike is more competitive than many feared and de Puniet is out to prove a point after a tough 2011.

After a year in the intermediate class, Espargaro is back for a second crack at MotoGP and will want to pick where he left off in 2010. As rookie seasons go, the Spaniard far from disgraced himself but with a hungry teammate alongside, he will have to raise his game to avoid dropping a level again.

The Czech rider was one of the pleasant surprises of 2011 as he demonstrated the kind of pace that proved he belongs in the big league. On the other hand, his regular visits to the gravel trap were not a huge shock and with a year’s experience under his belt, Karel will be searching for consistency in 2012.

Bradl was being touted for a MotoGP ride long before he wrapped up the Moto2 title in Valencia and his testing times suggest he is ready. The last man to race with LCR was also a former intermediate class champion, and he failed miserably. Bradl looks set to succeed where Toni Elias failed.

If any team could pick a rider for its debut season, they’d probably choose Colin Edwards. Forward Racing have gone with a BMW-powered Suter motorcycle and the Texan will ensure the constant development of the bike. Don’t be surprised if he starts slowly but Colin is a safe bet to be mixing it at the front of the ‘second division’.

Four wildcard rides with the Pramac squad represent Silva’s MotoGP experience to date and his greatest success has come in the Spanish Formula Xtreme series. Avintia Racing may see him as a benchmark for the performance of their new motorcycle but he’ll likely be battling his teammate to stay off the back of the grid.

Colombia has a rider in the premier class of Grand Prix racing but their man will have his work cut out. A solid performer in Moto2, Hernandez is clearly capable but without financial backing, his ride surely would have gone elsewhere and in pre-season, it very nearly did. His task is to outshine his teammate and he has a decent chance of doing just that.

After six years away, Ellison returns to the paddock with Paul Bird Motorsports who will also run the Aprilia-supported CRT machine. His performances in BSB and World Supersport showed that he is as quick as ever but he might not have much chance to show it from the tail end of the field.

Ioda Racing look like they’ve found a promising young rider in Petrucci who narrowly lost the FIM Superstock 1000 Cup last year despite winning three of the last four races, including an impressive victory at Silverstone. At 21, the Italian has plenty of improving to do and he has a chance to boost his reputation with the MotoGP newcomers.

Like Hernandez, none of Pasini’s performances in Moto2 told you he was a MotoGP rider in waiting. His only chance of victory came in the wet at Silverstone but he threw it down the road. Money played a key role as the Italian took the ride from the unfortunate Anthony West and he may find this a step too far.

We will continue to build-up to the new MotoGP season throughout the week including full previews of Moto2 and Moto3 ahead of first practice in Qatar on Thursday evening.