Young British racer Hector Hurst has spoken to theCheckeredFlag.co.uk after making his debut in the FIA Formula Two Championship at Silverstone last weekend.

2012 is only the 19-year-old's second season racing in single-seaters, but he has made the big step up to Formula Two after racing in Formula Renault BARC last year. It was a move that he told us only came about after a very promising winter test in Barcelona.

“Although our pace was OK, I didn’t gel with the new car very well and as it would have been my second year at that level, if I didn’t win or run always at the front then it would not have looked so good. So Mark [Blundell, manager] suggested that I jump into an F2 car in the end of season test at Barcelona for a couple of days, there was no expectation it was just an experiment, a good one!

“I loved the car and if anything, it felt more relevant to the car i had been racing in 2011. The pace was good and I felt that I would need not so many laps before I was able to push for champagne. Our plans then moved swiftly in that direction.”

Hector was taken on by former Grand Prix driver Blundell's 2MB Sports Management firm at the end of the 2011 season.

“Mark is great, as is everyone at 2MBSM,” he said. “We all have a very similar approach to getting the most out of our sport and the people in it and there’s no crap. Together with my coaches, I believe that I have a very strong team behind me now.”

Despite a lack of experience compared to most on the F2 grid, Hector enjoyed a positive couple of races at the season-opening rounds at the home of the British Grand Prix. He finished the first race in seventh place, although he admitted that a few rookie errors did hold him back.

“The races were good,” he said. “First qualifying went to plan and we got the car to eighth on the grid. From there I got a great start, saved the tyres and used my in car gadgets to keep the lap times consistent so we ended up seventh at the line.

“I made some rookie errors like picking up marbles on the first lap during a scrap so if it hadn’t been my first race then an extra place or two may have been available for the taking but overall I was pleased.” 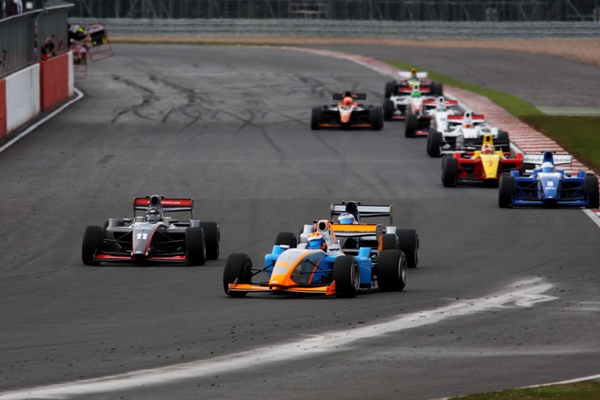 Hurst made up places from his starting position in both races - Photo Credit: Formula Two

Sunday got off to a difficult start with a disappointing qualifying result, but Hector was still able to have a good race and finish in the points in tenth place.

“On Sunday, qualifying did not go so well and we were then to start 11th. It was very close and I was just on the wrong side of a tenth or two, I could say I got held up in sector three but that's racing.

“There was some confusion at the start as the person in front seemed to prefer my grid box to his! But the race was actually better than on Saturday, I had some scraps at the start and then everyone got into a rhythm so I focused on saving my tyres and boosts until the end. I pushed in the last few laps and moved into the points. The pace was also much more competitive than the day before.”

Hector explained that after his strong debut performance in the end-of-season test in Barcelona, he was a little disappointed with the way that last month's pre-season Silverstone test went.

“Pace wise, I was surprised at the pre-season test to be off the pace to be honest,” he said. “The new carbon brakes were fine but the new type of tyre was a big jump in performance and I was struggling in the quick stuff. We have been working very hard at it since then and so now we are not so bad there. We finished Sundays race sixth quickest and four tenths off, I don’t expect this gap to disappear overnight but we should be there before too long.”

Finally, Hector explained that while he aims to move up the order as the season goes on, his lack of experience means he feels under little pressure.

“By the end of the season we should be consistently in the top few, there is no point in saying that I expect to be winning by then,” he said. “That is, I think, unnecessary pressure and having jumped a few steps up to F2 before having the level of experience that is expected means that I am not feeling really any pressure.”

The second race weekend of Hector's season takes place at Portimao in Portugal in less than two weeks, where he said he will have similar objectives to those he had at Silverstone.

By Joe Ellis
2 Mins read
A 1:27:945 was the best time of the entire test as Felipe Drugovich heads to round two in Monaco as the man to beat.
Formula 2

By Joe Ellis
1 Mins read
Richard Verschoor lowered the benchmark considerably on day two as many decided to turn on the style in Spain.
Formula 2

Lundgaard leads the way on opening day of F2 test

By Joe Ellis
2 Mins read
Fastest in both the morning and afternoon. Day one of F2 testing belonged to Christian Lundgaard and ART.