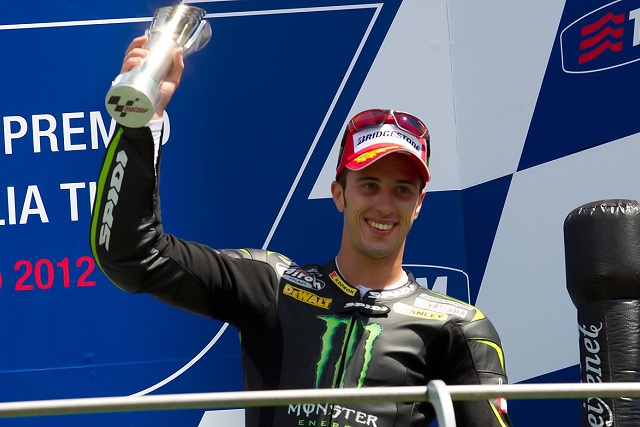 Andrea Dovizioso celebrated another special moment in his Grand Prix career with his third consecutive podium finish on home turf at Mugello. The Monster Yamaha Tech 3 rider was made to work hard by Stefan Bradl who challenged him all the way to the finish line and Dovizioso paid tribute to the German rookie for his part in the battle.

“To get a podium is always special but to do it in front of the Italian crowd and after such a strong battle makes it feel even better. I got the perfect start and was third at the first corner and I felt very strong in braking at the start so passed Dani at Turn 5. Immediately though I could see that Lorenzo was faster in some parts of the track, but it was good to see again the small points I need to improve to get the best out of the Yamaha. The fight with Bradl for the whole race was fantastic and he did a great job. When he passed me he was making it look easy and I was having to push right at the limit to make sure he couldn’t open up a gap that I couldn’t recover. He was trying for his first podium and I was pushing hard to be on the podium in Italy, so it made for a great battle. I knew I was a little bit stronger in the brakes than him so with three laps to go I decided to attack and I was confident I could hold him off. He didn’t give up but I am so happy with another podium and I want to say a big thanks again to my Monster Yamaha Tech 3 crew. We are working so well together and our results show it. After three podiums in a row now I am really looking forward to going to Laguna Seca.”

While Dovizioso now has four podiums in 2012, teammate Cal Crutchlow's wait goes on. The Briton paid for a poor start which left him caught up behind Valentino Rossi. Crutchlow couldn't get through and finished down in sixth but he gracefully accepted that Rossi's consistency made it impossible to pass.

“My start and the first five laps pretty much decided my race because I got a terrible start. Once I found my pace I was pretty comfortable but I didn’t have a very good feeling on a full fuel tank and that is something we need to work on. The battle with Valentino was fantastic and I learned a lot from him. His knowledge of this track is unrivalled and his consistency was awesome. I was faster than him in the final section but I was not close enough to pass him on the brakes and he had a fast bike down the straight. I did everything possible but he is incredible on the brakes and didn’t give me a chance. But we came from way back to almost get in the fight for the podium and I am happy to have got Nicky on the last lap for the top six. I was really strong at the last corner and made a good move, and to finish 1.4s off the podium having come from so far back is a positive outcome. I also want to say congratulations to Andrea. He is doing a phenomenal job and to get three podiums in a row in this class is a great achievement. He did it in front of his home crowd too and it shows what an unbelievable job the Monster Yamaha Tech 3 Team is doing in 2012.” 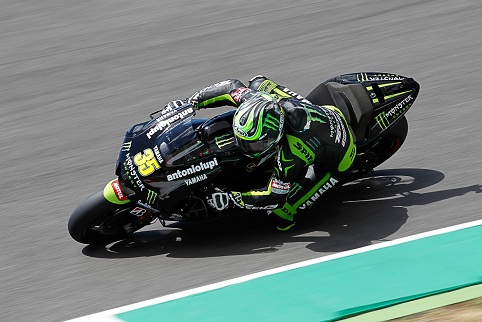 Team Principal Herve Poncharal was delighted with another strong result from both riders, especially as they're continuing to mix it with the factory outfits.

“That was another incredible weekend for the Monster Yamaha Tech 3 Team and to be on the podium in four of the last five races feels like we are dreaming. I have to give all the credit to Andrea, his crew and the Yamaha staff because together they are doing a fantastic job. These kind of results are very difficult to achieve but Andrea’s success is giving us an incredible feeling. Andrea’s start today was unreal and that was the key to him getting on the podium. He was close to the front at the start and then he got involved in a really exciting fight with Bradl and I think the Italian fans really enjoyed his performance. When Bradl passed him I wasn’t worried because Andrea is a very intelligent rider and I was confident he was saving his tyres to attack again at the end. He did that but Bradl certainly didn’t give up and Andrea showed nerves of steel at the end to get third.”

“I’m also happy to see Cal back in the top six. The second half of the race from him was really impressive and he was fast and consistent and never giving Valentino a moment to relax. A better start might have put him in the battle for the podium because he came from way back to finish less than 1.5s behind Andrea. That shows Cal never gives up and both of them back in the top six means it is another great weekend for the Monster Yamaha Tech 3 Team.”