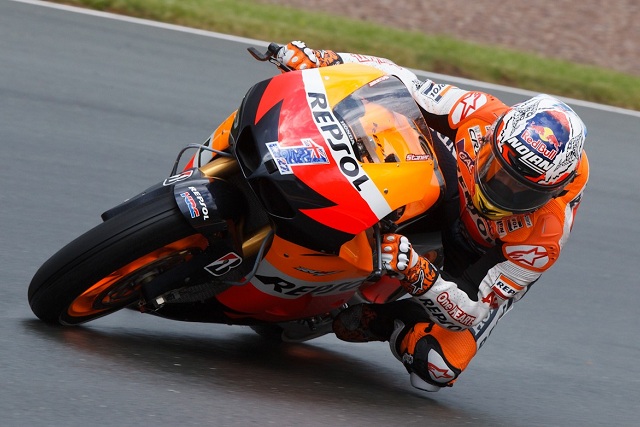 Casey Stoner snatched the 39th pole position of his MotoGP career but few will have been achieved in more dramatic circumstances than today at the Sachsenring. The session took place in wet conditions but the grip levels were rapidly improving in the dying seconds, seeing no fewer than eleven changes of polesitter.

In the worst of the conditions, Stoner was the fastest man but the world champion was given a fright 25 minutes in when his Honda RC213V broke down on him, forcing him to pull off at the Omega corner, which allowed Stefan Bradl to sneak in front of him to the delight of the home crowd. The rain started to fall heavier again, increasing hopes of a fairytale pole for Bradl but with just under ten minutes remaining, everybody rushed out for a final push, and the mayhem began.

The first change of leader came as Jorge Lorenzo clocked a 1:34.390, three tenths up on Bradl, but the Ducati's prowess in the wet showed soon afterwards as Nicky Hayden took over. The next change saw more good news for American fans as Ben Spies moved to the top of the order and despite brief spells at the front for Bradl and Cal Crutchlow, Spies was still on top with four minutes to go.

Bradl sent the spectators wild once more with a 1:32.738 but the joy was short-lived again as Hayden and Spies outpaced him seconds later. Stoner, now on his spare motorcycle, was languishing down in seventh but with a minute remaining, produced a 1:32.414 to demote the American pair.

With the chequered flag out, pole position was still up for grabs and Crutchlow was the first to overtake Stoner on a 1:32.288 but Dani Pedrosa restored Repsol Honda's supremacy within a matter of seconds. Spies then broke into the 1:31s to give Yamaha hope of pole but Stoner snuffed that out pretty quickly, with a 1:31.796 finally settling the argument. Spies and Pedrosa will complete the front row.

Jorge Lorenzo could only manage fifth in the mad scramble at the end with Stefan Bradl's brave challenge only yielding sixth. Nicky Hayden fell all the way back to seventh with Andrea Dovizioso and Valentino Rossi also missing out in the end to finish on the third row.

Aleix Espargaro will start a superb tenth on the Aspar CRT machine with Hector Barbera behind him in eleventh while James Ellison in nineteenth on the grid. Alvaro Bautista had set the eleventh quickest time but the penalty imposed from Assen will drop him to the back.