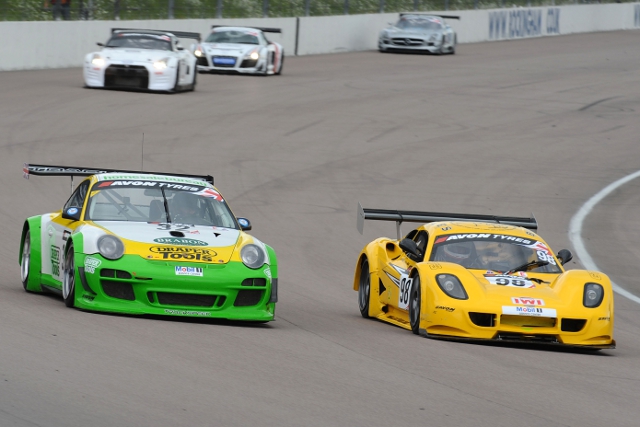 A Chevron might not be the first car that rounds the corner in your mind if you imagine a GT racing field. There is no doubt that will be a Porsche, a Ferrari or and Aston Martin.

But in The Avon Tyres British GT Championship those established giants are having to be increasingly wary of Chevron, and their GT3-spec GR8 machine. Chevron, a famous name in British sportscars arrived on the British GT grid last year with a GR8 car in the GTC class. Unfortunately – the driving duo of Jordan Witt and former BTCC man Anthony Reid spent much of 2011 competing only with themselves for class honours. The result were solid performances, but somewhat hollow results with no true benchmark to compare Witt, Reid and the diminutive GR8 too.

This season Chevron wheeled out a GT3-spec GR8 for Witt and Reid – a car designed to go up against the Porsches, Ferraris and Astons in the premier class of the British GT championship. For the time being, while the car is developed and awaiting full homologation, the car runs as the sole Invitation runner.

Again running as the only car in its class – and without the reward of points – you might see the change as a step backwards, but racing against the same cars that a fully homologated GR8 GT3 would has allowed the team to compare themselves on the race track, if not in the points standings. And in only a limited number of British GT outings – their Invitation status somewhat allowing them to blend the racing with testing and development work as the team see fit – the comparisons are very favourable.

After a difficult debut weekend at Oulton Park, and missing the Nurburgring rounds in favour of extra testing the June round at Rockingham was a coming out party for the latest GR8 as Reid weaved his way around the traditional front runners, leading the race for a handful of laps before pitting to hand over to Witt.

To paraphrase Reid's words following the race the performance was typically Chevron.

“Chevron have always built giant killing sportscars – that is their DNA,” Reid told The Checkered Flag, referencing the Chevron B16 seen fighting against the Lola T70 on historic grid. “They build small, nimble and fast cars.”

“To get into the lead in pitstop phase and to lead for three or four laps was a real thrill,” Reid told The Checkered Flag after the race. “The car also in the traffic is very good – they can block but they don't realise the car's so narrow and I can slip by or pass them on the outside, it's a lot of fun.”

Reid's description of the car as “fun” was visable, not only as he diced around the comparative giants at Rockingham, but as he carved his way up the hill at the Goodwood Festival of Speed in the car, taking the plaudits as the fastest man on the course at the event.

The racing also allowed the team to compare their strengths and weaknesses with the cars around them. Following the Rockingham race Reid remarked on how the Porsches were catching him under braking for the Deene hairpin – the second corner on the Rockingham roval. With development on-going the Chevron will line up for this weekend's British GT rounds at Snetterton with an upgraded brake package with the aim of clawing back some of the deficit Reid noted.

“We are expecting the Chevron GT3 to provide us with more speed this weekend,” said Witt, “as it has been fitted with new brakes, which will allow us to brake later into the corners. Needless to say I'm really looking forward to getting in the car and testing out the upgrade.”

The better brakes – though they remain untested – and the introduction of the nimble yellow machine to the twisting Snetterton 300 circuit can only increase the mood of optimism Reid epitomised at Rockingham.

“I'm very excited about the season,” Reid said following the race in mid-June, “we have developments coming quickly, we have new brakes coming. They can take a lot of time out of me on the brakes, but the great thing is the car's in the ball park, we can now see the little things that need to be done to make it fantastic.”

All things suggest there is much more to come from the the GT3 GR8 in the coming months.

Reid and Witt share the GT3 this weekend for the pair of 60-minute races at the Norfolk track, chasing another big result. Meanwhile David Witt – Jordan's father – and Ray Grimes will race the older GR8 in the GTC class.

The Checkered Flag will have live coverage of the Avon Tyres British GT Championship throughout the weekend.