When representatives of the Grand-Am Rolex Series and the American Le Mans Series formally announced the merging of the two largest sportscar series in America it was clear that many of the specifics for the new series were yet to be decided. However, there were some (relatively) solid facts that came out of the Daytona Beach press conference.

“I think sportscar racing has a distinct possibility, and I definitely feel like we are going to improve present conditions. There is no doubt in my mind that the answer lies with the two groups who are combining forces starting today.” – Jim France

That France, founder of Grand-Am and vice chairman of NASCAR, chose to echo the words his father spoke when founding NASCAR was pure rhetoric.

In truth fans of either the Grand-Am Rolex Series of the American Le Mans Series (ALMS) will know that sportscar racing has distinct possibilities, indeed it has already lived up those possibilities with both series, on their own offering fine multi-class endurance racing.

That, in effect is part of the problem with this merger.

And a merger is exactly what it is.

“I’m going to go on the record and say that [ALMS GT] will absolutely be in addition to what has historically in modern times been the 24 Hours of Daytona,” – Scott Atherton

The GT class of the ALMS will be included in the newly merged series (Photo Credit: Ryan Smith)

There was much speculation that the deal was simply a dressed up buyout of the ALMS with teams expected to assimilate to the Daytona based series or else find their racing elsewhere. Technically, yes, it’s a buyout with the assets of The Panoz Sports Group passing to new body headed by France, with Dr. Don Panoz as vice chairman. However, from the press conference today where the deal was formally announced, it appears there is every intention to merge the series as completely as possible.

Even more so that the two sanctioning bodies some of the series’ fans have little or no love for the other championship.

Perhaps that’s why Atherton – the president and CEO  of the ALMS – was so quick to assure fans of his series that the ALMS’ GT class would be “an addition” to the Rolex 24 grid when the new merged series begins in 2014.

“You open up here with a 24 hours of Daytona followed by the 12 hours of Sebring and then you just visualize the rest of the true all-star, four-star examples on our collective schedules; it’s a very powerful combination,” – Scott Atherton 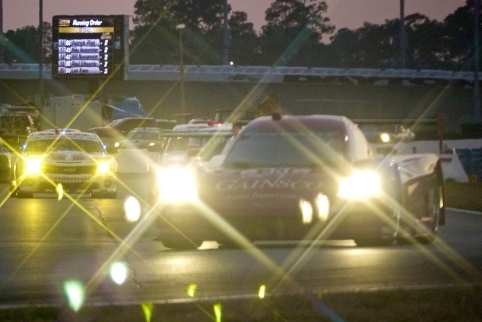 The Rolex 24 looks set to remain as the season opener into, and beyond, 2014 (Photo Credit: Grand-Am)

There was – largely – no calendar. Atherton mentioned a 12 race calendar beginning with the mouth-watering prospect of a Rolex 24 at Daytona followed by a 12 Hours of Sebring, suggesting that both series maintain at least one of the headline endurance races. What happens to the secondary endurance races – Petit Le Mans and the Sahlen’s Six Hours – at this stage is anyone’s guess.

Elsewhere similarly there were few specifics about the make-up of the new series.

There was no name, though ALMS founder Dr. Don Panoz referred to it as the largely generic American Sports Car Series.

Understandably, given the differing natures of the two series – especially in their prototypes classes – there was little, aside from Atherton’s mention of the ALMS GT class of the class structure for any combined series. Though it was revealed that the agreement happened as long ago as sixth months that time, Atherton explained, had been spent on the legal formalities of the amalgamation, rather than preparing sporting and technical regulations.

“I think it’s too early to be definitive. The vision has been clearly established but it’s been all by the guys in the suits. And the practical application of our vision with the realities of technical limitations and capabilities, is yet to be determined,” – Scott Atherton

What was mentioned –though by Dr. Don Panoz – was the need for shared test days between the two series, suggesting that the two series’ current machinery could be pushed into the same class in the new series. The experimental DeltaWing was also mentioned as possibly finding a racing home in the new championship.

Potentially confirming one change Dr. Panoz said that the men behind the series were not thinking of LMP1 machinery, surprisingly dismissing the premier class as a “manufacturer’s playpen” outside of the capabilities of both the ALMS and Grand-Am. However, the link to the Auto Club de l’Ouest (ACO) remains.

“When Jim and I sat down back in February, he made the comment that he thought it was an important priority to retain the relationship with the ACO and to retain the link to Le Mans,” – Scott Atherton

The new series will maintain links with the ACO and the 24 Hours of Le Mans (Photo Credit: Rolex/Stephen Cooper)

With discussions on-going between the board members of the new series and the ACO the intention is for some of the teams from the new series to be able to qualify for the 24 Hours of Le Mans. Of course, the ‘some’ could be just the ALMS GT class, with the other ACO regulations classes phased out in favour of the Rolex Series equivalent.

That the NASCAR side of the deal appears to have been the driving force behind maintaining the Le Mans link – rather than Atherton and Dr. Panoz insisting on it as a piecemeal offering to ALMS team and fans – is surprising.

Instead, of the men gathered in Daytona Beach it was Dr. Panoz who was the most skeptical of any ACO/WEC link, placing the emphasis on satisfying their domestic market, as well as sponsors team and fans.

“All of these issues are on the table. All of these ideas are surfacing. We have had numerous chats about this. And I can honestly say that on these ideas and coming together and discussing them with Jim and our other people, all of the results and all of the reactions to this have been positive, from everybody’s point of view. And not trying to find problems with it, but trying to find solutions to live up to what we think would be the greatest sports car racing series in the world,” – Dr. Don Panoz