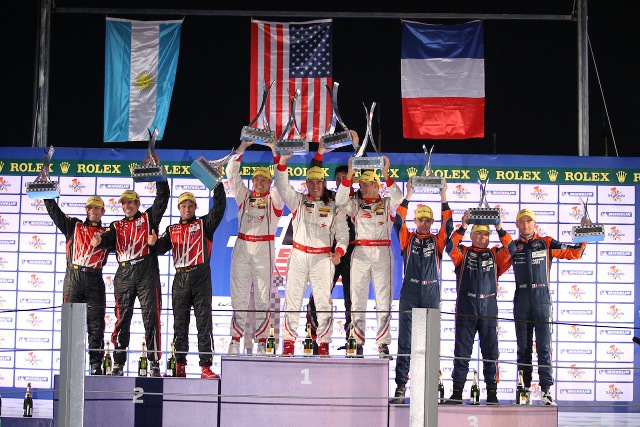 The driving combination of Luis Perez Companc, Pierre Kaffer and Nicolas Minassian combined to give Pecom Racing their fourth podium result amongst the LMP2 squads competing for the FIA World Endurance Championship.

Perez Companc and Kaffer had been part of the team to take top three results from Sebring, Le Mans and Silverstone and for the fifth round of the WEC at Interlagos the ORECA 03-Nissan equipped team was further strengthened by former Peugeot driver Minassian. Together the team claimed second place, their best result of the year so far.

The race did not start well for the team, Kaffer one of several drivers involved in an accident at turn four on the opening lap. With damage to the front of the car Kaffer pitted after the first lap and new bodywork fitted began to work his way back up the order.

In the super-competitive class – the largest in the WEC field – the trio benefitted from problems for rivals. Silverstone winners ADR-Delta lost a wheel, as did the one of the Signatech Nissan entries but the consistent pace of Minassian – taking a double stint after Kaffer – and Perez Companc moved the team into position to benefit from late problems for the OAK Racing duo.

Dominik Kraihamer’s retirement with fuel pump problems lifted the #49 team to third and a two minute penalty for Olivier Pla out of second place pump Kaffer into second place to take the checkered flag behind class winners Starworks Motorsports.

The points for second place moved the team further clear in third place in the class points’ standings, as well as bringing them closer to ADR-Delta in the fight for second in the standings. With three races remaining – the first of which the Six Hours of Bahrain of September 29 – there are just four points between the two teams.