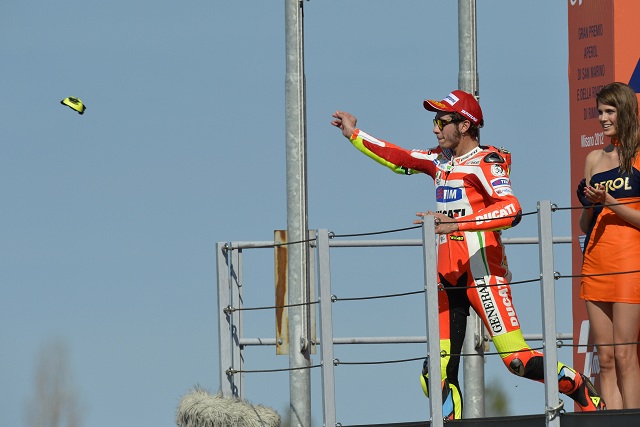 Valentino Rossi dedicated his second-place finish in the San Marino Grand Prix to the family of his late friend Marco Simoncelli. Rossi matched his best ever result in Ducati colours at the circuit named in honour of Simoncelli and also paid tribute to the team for improving the pace of the GP12.

“It was a really nice race, and I’m very happy. It’s a great result, which I’d like to dedicate to Sic and his family, Paolo, Rossella, and Martina. I’d also like to thank all the guys who work with me and everyone at Ducati Corse who are giving their best, like me: after two difficult years, we really needed that. I’m very pleased because we did a dry race at a high level, always with a fast pace, and with a limited gap to Lorenzo.

“We worked well. The new frame and swingarm allow us to make more changes to the geometry, and in fact here the feeling with the front was improved and the bike also seemed to be better balanced on acceleration. The setup that we found was also good, as I managed to be fast and consistent for the whole race. It will be important to continue working well and do our best to take the Ducati as high as possible in the next races as well.”

Teammate Nicky Hayden marked his return from injury with seventh place but the American admitted he was far from 100% and the support of Ducati’s home crowd carried him through.

“I felt bad enough this morning that we considered not racing, but being here in Italy, I wanted to at least try. This track seems to provide a lot of drama, and I thought if I could just stay clean and get to the finish, I might salvage somewhat of a result. I knew it was going to be extremely difficult. Unless you’ve ever used carbon brakes with a Bridgestone front tyre, you don’t realize how hard you can squeeze the lever on a MotoGP bike now, and a couple of laps, I had to slow down to try to let my hand recover.

“It wasn’t very strong, and it was really painful, but I was able to hang on and get a seventh today. Hopefully I can start building up for the rest of the season. It’s great to see Vale on the podium, and it’s a well-deserved reward for all the effort by Filippo, his staff, the team, and the factory.”