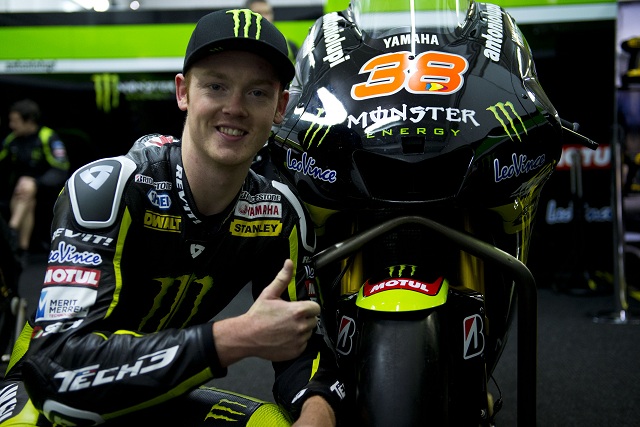 Bradley Smith’s dream debut on a MotoGP bike proved to be an anti-climax as the Spanish weather kept him in the garage all day at the Ricardo Tormo Circuit. The British Moto2 graduate will race for the Monster Yamaha Tech 3 squad in 2013 but will have to wait until Wednesday for his first experience of the YZR-M1, even though the forecast isn’t promising for then either.

“To say I am disappointed is an understatement. I’ve been looking forward to today for months, so to not even get out on track for one lap is a bit frustrating, but there is nothing I can do about it. When I got in my leathers yesterday and sat on the bike for the first time, it really hit home what a big day in my career this was. It is a shame that I’m still waiting to try the Monster Yamaha Tech 3 YZR-M1 for the first time but my chance will come. For most of the day the conditions were the worst possible. I was only going to get let out if the track was really soaking so I could get a feel for the bike. It looks the weather is going to be even worse tomorrow but at least I’ll get out for a few laps and that will be a bonus.”

Smith’s teammate Cal Crutchlow admitted he was still suffering pain from his crash during the Valencia Grand Prix on Sunday but was still hoping to get some running in, to no avail.

“Today was pretty frustrating because I didn’t even put my leathers on. Everybody was really pumped up and excited for the start of the 2013 season but it made no sense to go out. We need a dry track to evaluate the material we have got, and unfortunately it looks like tomorrow is going to be even worse with heavy rain. It is a pity because we only need a couple of hours on track to check a couple of things. We’ll see what happens but if it was dry today it was going to be difficult for me. My crash in the race on Sunday has left me with quite a lot of pain in my left hand but it still would have been good to go out and do some riding.”