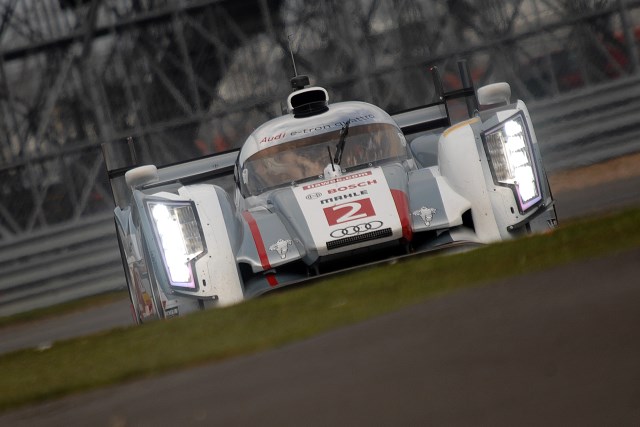 Audi kicked off the 2013 FIA World Endurance Championship (WEC) with an impressive one-two victory at the Six Hours of Silverstone.

The result marks the team’s second one-two finish in 2013 following the non-championship Twelve Hours of Sebring in March and the first time they have claimed the famous RAC Tourist Trophy a trophy that has been awarded since 1905 and was the main prize for the 2013 event at Silverstone.

“We knew it would be a difficult race.” explained Allan McNish, driver of the winning car alongside Loic Duval and Tom Kristensen. “The competition with Toyota was tough, plus there was a thrilling duel between both Audi cars. In the end, it became a battle between Benoît Tréluyer and me. After I spun, I went for maximum attack on new tires. I managed to move to the front only on the penultimate lap. I’m happy about having scored the maximum number of points at the WEC opener for the second consecutive time.”

The #2 Audi regained the lead on lap 151 and, despite an excursion of the circuit down the Hanger Straight while lapping another car and an additional tyre change, took the victory by 3.4 seconds over the reigning World Champions.

The gap back to the Toyotas was one lap, despite the Japanese cars’ fuel tanks being 20 percent bigger than those of the Audis, resulting in an additional fuel stop for the R18 e-tron quattro machines.

“It’s very nice to be able to finish the first WEC race in 2013 with a one-two victory. From the beginning to the end, we showed a consistently good performance.” said Head of Audi Motorsport, Dr Wolfgang Ullrich. “Both cars were running on different strategies and it was thrilling through to the end. Although car number 1 was ultimately handicapped the lap times were very strong.

“A duel of the kind fought between Allan McNish and Benoît Tréluyer is unrivaled in motorsport. That proves that our drivers are free to battle on track. But they also know that they’re driving for the Audi brand and they impressively showed that.”