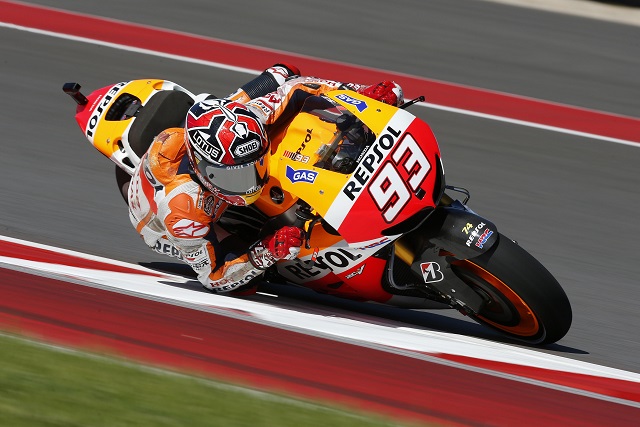 Marc Marquez left his more experienced MotoGP rivals trailing on his way to a maiden pole position in the premier class at the Circuit of the Americas. The Moto2 champion, riding in just his second MotoGP weekend, outpaced Repsol Honda teammate Dani Pedrosa with Jorge Lorenzo a full second behind in third.

The day didn’t get off to an ideal start for the Spanish sensation who suffered a highside in third practice but having escaped any injury, he proceeded to dominate the fifteen minute fight for pole. His very first lap was 2:03.245 which would have actually secured him pole position anyway but the 20 year old was in no mood to stop there, improving on his next lap to a 2:03.021 to put the result beyond any doubt.

Significantly, for his own state of mind if nothing else, teammate Dani Pedrosa managed to close the gap to a quarter of a second while Lorenzo remained a second back after pitting two minutes from the end of the session. That almost saw him knocked off the front row by an inspired Cal Crutchlow with the Briton a tenth off the factory Yamaha on his satellite machine.

Stefan Bradl will start from the middle of the second row in fifth ahead of Andrea Dovizioso and Alvaro Bautista while Valentino Rossi put in another modest qualifying performance to end up eighth, only 0.009s ahead of the CRT benchmark Aleix Espargaro who threatened to beat the star of Qatar until the dying seconds of Q2. Nicky Hayden was tenth on the second factory Ducati ahead of Bradley Smith who did well to advance from Q1 and claim the scalp of Ben Spies in the second session.

Smith was required to pull a last gasp flyer out of the bag to knock Andrea Iannone out in Q2, leaving Pramac Ducati with a rider missing from the pole position shootout for the second Grand Prix in succession. Michael Laverty put in a tremendous performance to qualify seventeenth, just one place behind Paul Bird teammate Yonny Hernandez but Karel Abraham won’t be quite so proud of his afternoon’s work after crashing into Bryan Staring during Q1, suffering a broken collarbone in the process.

Petrucci – This championship will be a surprise for everybody