Davies Back On Form At Oulton For TCR 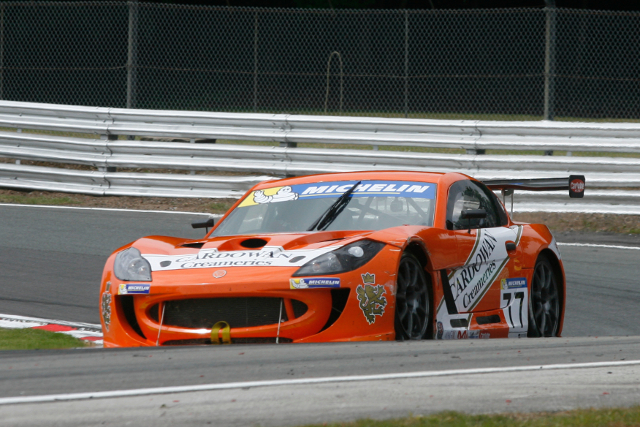 Mark Davies produced his most competitive showing of the 2013 Michelin Ginetta GT Supercup at Oulton Park, taking a pair of podium finishes for Total Control Racing.

Davies led the Wednesbury-based team’s charge in Rounds 10 and 11, taking his second and third podiums of the year with a pair of third place finishes. The reigning Ginetta G50 champion

Reigning champion Carl Breeze struggled to challenge for the podium finishes over the weekend, however he consolidated his second place in the championship standings with a brace of fourth places.

The team’s competitive showing was cemented by Jamie Orton. He made it three TCR cars in the top five after following Breeze home in both encounters, though the results has dropped him to sixth in the championship standings behind Davies.

The team expanded to a four-car entry in the Michelin Ginetta GT Supercup for the first time in the team’s history for the weekend, with the addition of Eurocup Clio series regular David Dickenson. The Irishman had a strong debut, taking a pair of top twelve finishes.

“It’s been a good weekend for Mark, two podiums is fantastic and especially as the competition was so hard this weekend,” said TCR team principal Lee Brookes, “It’s nice to see Mark back where we know he should be. David has been impressive on his first weekend, he’s gone quicker and quicker and although this is a one-off for him hopefully he’ll be back out with us at some time in the future.”

“We’re not sure yet why Carl seemed to struggle a bit, two fourths is good for the championship though, and Jamie had a strong weekend as well. They’re all so closely matched and the competition is fierce. It’s not been as good as we wanted but still a strong weekend.”