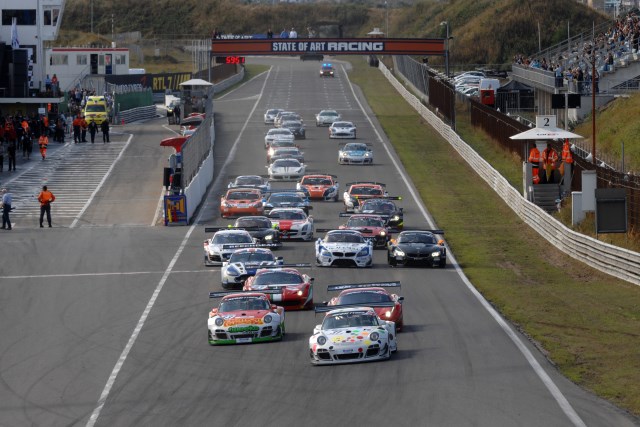 A dominant win in the second Avon Tyres British GT Championship race at Zandvoort kept Trackspeed drivers Nick Tandy and David Ashburn in the championship battle with just the finale at Donington Park left of the season.

A superb first stint from the Porsche works driver set up the pairing for their third win of the season. Tandy got away from pole position without issue, Phil Keen making it a Trackspeed 1-2 in the early laps by passing Rob Barff at Tarzan on the opening lap, beginning a battle that was to be a highlight of the opening half of the race, as well as an enabler in Tandy’s escape to glory. A mistake by Keen late in his stint while lapping GT4 traffic allowed Barff to take back second place, but left Tandy ten seconds ahead at the start of the pitstops.

Keeping pace with Keen after losing the place on lap one, Barff was in position to pounce when the mistake came at the S-Bocht. Joe Osborne passed Aaron Scott for fourth by the end of their respective stints, while Dan Brown in the sister 888Optimum BMW Z4 GT3 to Osborne’s fought for a way past Matt Bell in the United Autosports Audi. However, in his urgency to move forward, hoping to repeat the second placed finish of yesterday Brown tagged the APO Sport Ginetta G50 that was leading the class at the time.

Alex Osborne in the Ginetta was sent straight on into a tyre wall into instant retirement. Brown meanwhile spun into the barriers further up the track and was able to continue for a few more laps before retiring the car. Brown and co-driver Steve Tandy remain in the championship fight, as do Matt Bell and Mark Patterson, though they too failed to score a point.

A day after setting the fastest lap of the first race the pair struggled with a baffling lack of pace that left Patterson powerless as he sank down the order in his stint from seventh to eleventh.

Lee Mowle was another to fall down the order after taking over the #8 BMW from Joe Osborne in third place – aided by a spin by Jon Minshaw shortly after taking over the #33 Trackspeed Porsche from Phil Keen. Around Mowle developed the best fight of the second half of the race as a train of cars built up behind him.

Having lost positions to both Mowle and John Dhillon (in the AF Corse Ferrari started by Scott) Minshaw picked his way back past both drivers to claim the final spot on the podium. The fighting between the three drivers allowed Andrew Howard, Marco Attard to latch onto the back of the battle, and, after Dhillon had taken fourth from Mowle, challenge the 888Optimum driver themselves.

Howard made his move to the inside of Tarzan, taking fourth from Dhillon at turn seven a few laps later. Attard, who started the race in the championship lead, 3.5 points ahead of Howard passed Mowle to keep in touch with the Aston Martin driver. He tried to follow past Dhillon, lining up a move at Tarzan. However, he locked up, skating wide and narrowly avoiding a trip into the gravel trap without losing a position.

He failed however, to pass the Ferrari, the difference in points pushing Howard back into the championship lead by the slimmest possible margin. Mowle clung onto seventh, PGF–Kinfaun men John Gaw and Phil Dryburgh eighth ahead of race one winners Ahmad Al Harthy and Michael Caine and the Fortec Motorsports Mercedes of Benji Hetherington and Jason Minshaw, Minshaw spinning at the S-Bocht on the final lap to fall from eighth, adding another place onto the Oman Air Motorbase pairing’s salvage drive after starting 21st.

Caine made good early progress, moving up to 12th in quack order, resisting the pressure from Warren Hughes’ WRT Audi behind. After taking over the Porsche in the earliest of the mid-race pitstops Al Harthy passed the fading Patterson for 10th with the final lap pass keeping the defending champions in a position where a race win at Donington will guarantee them a second title. 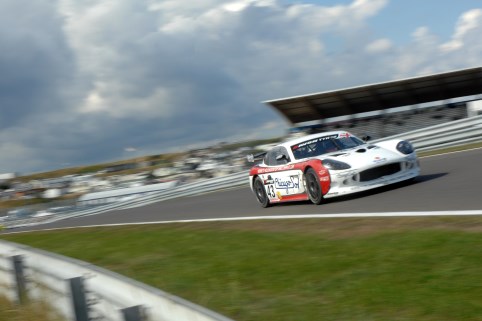 Declan Jones recovered from early problems for the Century Motorsport Ginetta G50 to win the GT4 class and take the points lead. Nathan Freke, starting the car had the car cut out beneath him, but rebooting the ECU restarted the #43 car. Against the less experienced drivers in the Triple R/Blendini and Redgate/Lifetime Racing G40s Jones was easily able to take the lead and pull away to a third win of the season.

At the very front of the race Tandy’s first half lead had been bolstered by the success penalty Barff and Gary Eastwood carried into the race after their podium the day before. In the final laps, as victory looked more and more assured Ashburn backed off, the margin of victory recorded a 12 seconds over the FF Corse pair.

By James Thompson
5 Mins read
The RAM Racing Mercedes of Sam de Haan and Patrick Kujala overcame a spin at the start to take their first British GT victory of the year and grab the championship lead after an enthralling three hour endurance race at Donnington Park.
British GT

By James Thompson
1 Mins read
Yelmer Buurman went quickest in Free Practice 2 as the RAM Racing team continued to dominate he Donington Park round of the British GT Championship.