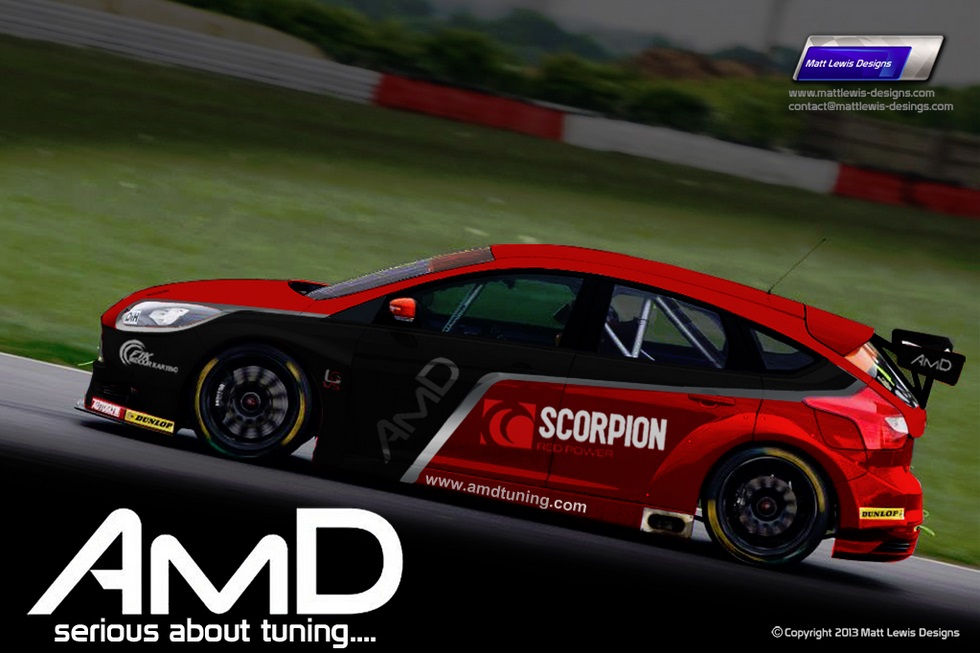 AmDTuning.com have confirmed that they will appear on the the 2014 Dunlop MSA British Touring Car Championship grid with an NGTC Ford Focus, having successfully been granted a mandatory TOCA TBL Licence for the new season.

Shaun Hollamby‘s team will therefore embark into its fifth BTCC season, after earning a place on the 2014 grid akin to finalizing a deal with race-winning outfit Motorbase Performance to race one of its Ford Focus models built to qualifying NGTC regulations.

AmDTuning.com team boss Hollamby said: “Obviously it is fantastic for us to have been granted a licence for 2014 and beyond.

“The fact that the series organisers have selected us to receive a TBL is a great compliment, and shows that we have done a good job in recent seasons. Knowing we have an entry for the next three seasons has allowed us to make the investment in an NGTC car and we have high hopes for the 2014 campaign and beyond.”

The team previously ran a Volkswagen Golf since its debut back in 2010, securing three victories in the 2013 Jack Sears Trophy class for S2000 cars most recently.

Despite plans to run an NGTC Vauxhall Astra falling through last season, Hollamby added that the chance to fight for success in the BTCC is now a distinct possibility running a Ford Focus which is already a proven front-runner.

Hollamby added: “We looked at the various options that were available to us when it came to running an NGTC car, but it had to be a car that was a fit with our core business. We do a lot of work on Ford models and [team boss] David Bartrum at Motorbase is someone I have known for more than 25 years, so it made perfect sense for us on all levels to do a deal to run a Focus next year.

“The car is a proven race winner in the series and having served our apprenticeship in the last four years with our little VW Golf, the time has come to make the move up to the next level. To do that, we know we need the right package and that is exactly what we are getting with the Ford.”

With sponsorship deals having also been secured, Hollamby concluded that talks with a front-running BTCC driver have proved equally successful, further announcement to occur during January’s Autosport International Show at the NEC in Birmingham.

Hollamby concluded: “Previously, the Golf wasn’t a car that was high on the list for potential drivers but now we have one of the top cars on the grid and a number of people have wanted to talk to us about next year. We are very happy with the deal we have agreed, and with the driver we have onboard, there is no reason why we can’t make the push for podium finishes when the new season gets underway.

“We’re looking forward to getting out on track and starting work with the Focus and are ready for the challenge that lies ahead.”