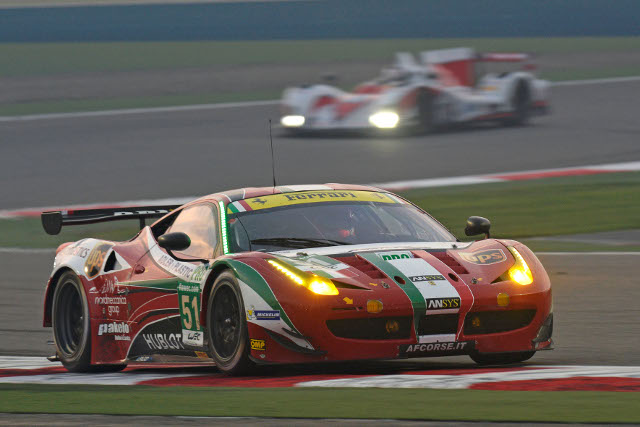 AF Corse and 8Star Motorsports have taken a trio of crowns for Ferrari following a stunning final race of 2013.

The Six Hours of Bahrain saw the teams take the GTE Pro and Am teams titles as well as the World Endurance Cup for GT Drivers for Gianmaria Bruni.

The commanding win taken by Bruni and team mate Toni Vilander showed how strong the Ferrari 458 is as a package following a commanding 43 second victory over the chasing Porsche of Patrick Pilet and Jorg Bergmeister.

Ferrari President Luca Di Montezemelo was full of praise for the car: “I am very happy that we have won everything for a second consecutive year,” he told www.ferrari.com. “This result rewards AF Corse’s efforts and consistency and I congratulate them on it. I am also very pleased to see an Italian driver crowned world champion: Bruni has been with us for a long time now and he deserves this victory. The 458 Italia is an amazing car and what it has achieved over the past years on the racing front confirms that fact.”

8Star should also be praised due to the fact that in only their first season of competition with the car the driving trio of Davide Rigon, Rui Aguas and Enzo Potolicchio took the teams title and were runners up in the drivers championship. The same could be said of the AF Corse Am effort of Matt Griffin, Emmanuel Collard and Francois Perrodo that ended up third in the standings, indeed Griffin will move up to the Pro class next year with Ram Racing.