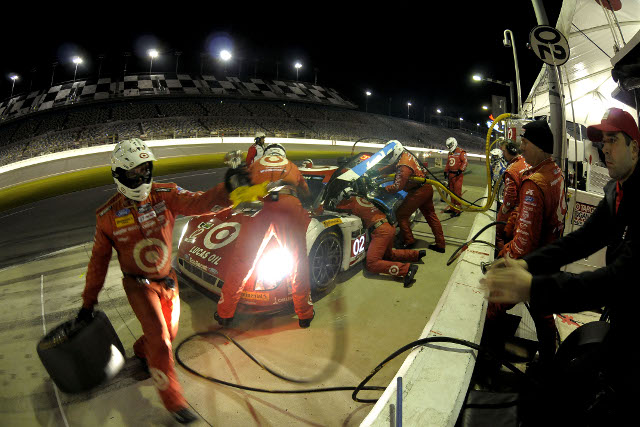 Scott Dixon took the lead of the Rolex 24 at Daytona shortly before the end of eleventh hour racing, taking advantage as Christian Fittipaldi got up to speed after taking over the #5 Action Express Racing Corvette DP.

Fittipaldi took over from Joao Barbosa who had resisted pressure from Dixon in the laps immediately following the restart after the latest full course caution period, before starting to pull away – though the exact gap fluctuated due to traffic around the track.

Dixon pitted first, Barbosa following in a few laps later to turned the car over to Fittipaldi who returned to the race in the lead. However, on Fittipaldi’s first full lap back in the car Dixon was able to complete a pass through the International Horseshoe.

The other Chip Ganassi Racing with Felix Sabates hit problems – and the wall – Scott Pruett hitting the outside wall around turn three of the Super Speedway doing significant damage to the right-front of the #01 car which went straight to the garage for repairs, where it remained at the end of the hour.

Antonio Garvia led the GTLM class to the restart but was quickly usurped by Porsche North America’s Patrick Pilet who began to pull away. Later in the hour Garcia departed the lead battle – temporarily – with a pitstop, while both Porsche drivers continued their stints to run first and second in the class at the end of the hour.

It was a similar story in GTD where Kuba Giermaziak and Alessandro Balzan were nose-to-tail for the class lead after the restart before Balzan began to ease away in the Scuderia Corsa Ferrari. However, he too would pit before his immediate challengers, Jeff Westphal taking over the car down in fourth place in the class.

CORE Autosport lead the PC class with Mark Wilkins at the wheel of the car that started the race from pole in the spec class.