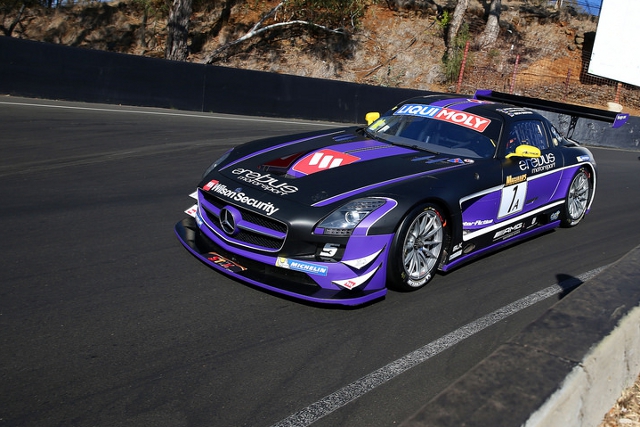 A late lap from Maro Engel in the final, 15 minute part of qualifying for the Liqui–Moly Bathurst 12 Hours stole pole position – and with it the inaugural Allan Simonsen Pole Position Trophy – from Mika Salo and the Maranello Motorsport team.

Salo’s record breaking 2:03.942 from the morning session held firm through the second qualifying session that was headed by the JBS Swift Lamborghini Gallardo, converted back to running in 2013 specification and so moving from Class B up to Class A. The work needed to change the relevant parts of the car had kept the team (Roger Lago, David Russell and Peter Kox) out of the morning session.

It looked as though Salo’s time, in the Ferrari 458 he shares with Peter Edwards, John Bowe and Craig Lowndes, would be enough for pole position until the closing laps of the 15 minute finale to qualifying, set aside for the Class A teams to make a run for pole position without the hazard of the slower cars in the lower class around the track.

In the #1 Erebus Motorpsort Mercedes co-driver by Nico Bastian and Bernd Schneider Engel lapped the Mount Panorama circuit in 2:03.859, beating Salo’s time by less than a tenth of a second, lowering the lap record time for a fourth time in the weekend in the process. Though only sixth fastest in the final session the Maranello Motorsport team will still line-up second on the grid for the race courtesy of Salo’s time.

Shane van Gisbergen was another to improve his time in the final session, moving the Darrell Lea sponsored McLaren MP4-12C up to third fastest. Will Davison ensured the second Erebus Motorsport Mercedes SLS AMG GT3 will start from the second row of the grid.

The departure of the Gallardo from Class B for Class A cleared the way for Oakley Motorsport’s Audi R8 LMS to take the class B pole, Corvette works pilot Oliver Gavin setting a best time of 2:07.999 in the oft interrupted morning session.

Both of the longer sessions were interrupted by red flags, incidents claiming several high profile teams. Jason Bright’s spin and crash in the skwirk.com.au Audi early in the morning session would bring their Bathurst 12 Hours weekend to an end. Steve Wyatt dealt the AF Corse team a similar blow with his own accident in the second qualifying session.