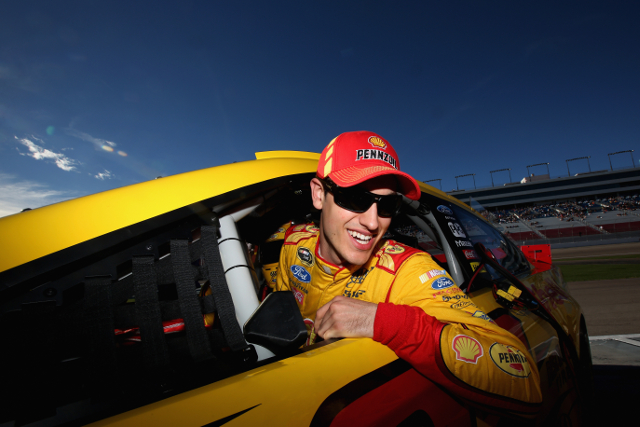 For the second NASCAR Sprint Cup Series weekend running it was the pair of Penske Racing Fords that took the front row places away from the front row qualifying format. However, at Las Vegas Motor Speedway it was Joey Logano who set the fastest time ahead of Phoenix polesitter Brad Keselowski for the Kobalt 400.

On the 1.5 mile LVMS track the qualifying session was split into three parts, the fastest 12 drivers in a five minute session deciding the front half dozen rows and, of course, pole position. Drivers had to use the same set of tyres throughout the entire session, and so speeds were expected to slow as the afternoon progressed.

Such logic seemed sound Brian Vickers’ first segment topping time of 27.980 seconds breaking the track record which held firm through the middle part of time trials which cut the field from 24 to the 12 with a chance of pole.

In the final five minutes though both Penske drivers took the track record down – ultimately out of anyone else’s reach – Keselowski holding provisional pole on a time of 27.965 before teammate Logano went faster still with a 27.939.

“To have a Penske front row the last two weekends at two completely different race tracks just goes to show how hard these guys have been working,” reflected Logano. “When you work hard those results come.  We obviously haven’t won on Sunday yet, so we’ve got to figure out the big show, but we’ve had some good speed in our cars.”

Clint Bowyer qualified third fastest in the #15 Michael Waltrip Racing Toyota ahead of Austin Dillon in the #3 Chevrolet and Jimmie Johnson, the only driver from the Hendrick Motorsport stable to earn a place in the top 12.

Round one pace setter Vickers, in a second Michael Waltrip Racing entry, will start ninth after scraping into the final part of the session with a two-thousandths of a second advantage over Kasey Kahne who missed the cut as he and Hendrick teammates Dale Earnhardt Jr. and Jeff Gordon set times to start 13th, 14th and 15th.

Having run the second fastest time in the opening round Kahne was a casualty of the new format. He punctured a tyre late in the opening segment of qualifying. Officials allowed his #5 team to fit a new tyre, but the time lost – both at the end of the first round and the start of the second – prevented him from calling down his engine sufficiently to be able to run a true flying lap, while the new tyre upset the handling of his machine.

The Hendrick trio were just some of the big names to miss the top 12, Phoenix winner Kevin Harvick 16th fastest, Kyle Busch 20th and Tony Stewart 24th fastest after only setting a single lap in the session.

Busch’s Joe Gibbs Racing teammates Denny Hamlin and Matt Kenseth fared even worse. They failed to secure a berth in the second round of qualifying and so will start 27th and 29th respectively.

The Australian set the slowest time of the 48 drivers who attempted to qualify as he was foiled by a holed radiator leaking water onto his own tyres. Ambrose also have eventual pole winner Logano an alarming wake-up call when he slowed exiting turn two, Logano nearly rear-ending the #9 as he tried to set an early flying lap.

“I was on the binders as hard as I could to make sure I didn’t hit him,” said Logano, “but it gets crazy out there.  You’ve got that going on and then you’ve got cars shut off [cooling engines] going 60 miles an hour next to a car going 205.  It’s a big speed difference.  Things come up really quick.”