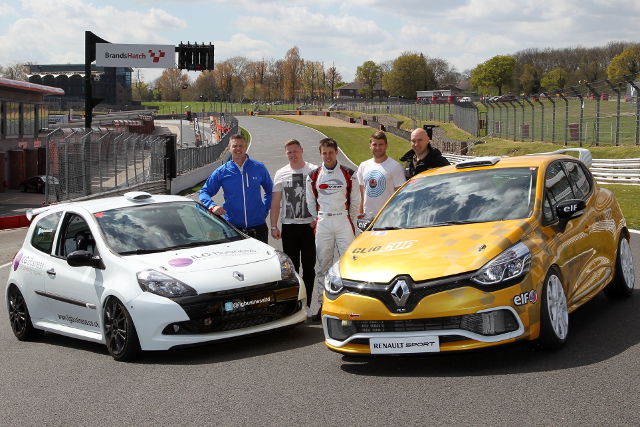 Some of the stars players from Aviva Premiership Rugby leaders Saracens swapped their gumshields for helmets as they took to the track with Renault UK Clio Cup front-runner Mike Bushell yesterday (14th April) at Brands Hatch.

As well as enjoying high-speed passenger laps alongside Bushell in the new fourth-generation Clio racer, the ILG ambassadors also got behind the wheel of a race-prepped third-generation Clio, which was raced in 2013 by Bushell and is now owned by ILG for trackday use.

The competitive sportsmen were naturally keen to be quickest on the day, with Wigglesworth getting the best of his Saracens team-mates, though Brits was unlucky to run wide when he was on course to snatch the best lap.

“I am definitely no expert at driving on track, I just got a little bit braver lap by lap,” said Wigglesworth, “I loved it, it was really, really good and brilliant having Mike alongside and just believing the Clio would stick when he said it would. I think I might have the bug now!”

“It was a really great day, fantastic all the guys had the chance to get in the fourth generation car for some passenger laps as well as actually driving the third gen Clio,” added Bushell. “Everyone thoroughly enjoyed being taken out for a blitz in the new car, they were beaming from ear-to-ear and said it gave an incredible insight into what it takes to be a racing driver.”