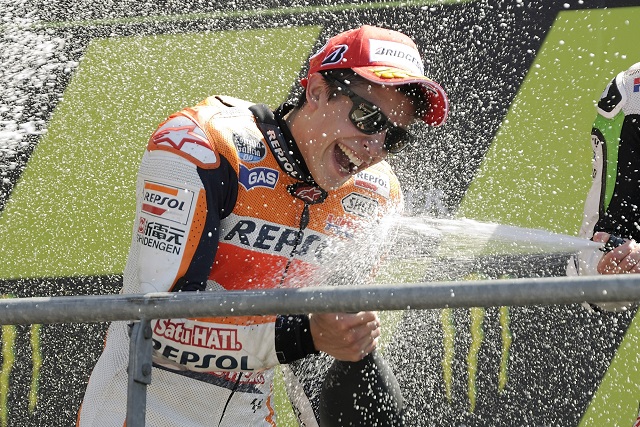 Marc Marquez bounced back from a disastrous opening lap to win his fifth race out of five in the 2014 MotoGP season at Le Mans. The world champion fell to tenth before he knew it but made a tough recovery through the field look ridiculously easy as he extended his extraordinary winning streak.

The trouble started on the run towards Dunlop when the polesitter was relegated to fifth but an aggressive move by Jorge Lorenzo at Garage Vert sent them both careering off the track and Marquez was well and truly on his back foot. A crash for Andrea Iannone on the second lap removed one of the obstacles in his way but Marc still had plenty of work to do.

Alvaro Bautista was despatched on lap three, as was Marquez’s teammate Dani Pedrosa, while Marc followed Jorge Lorenzo past Bradley Smith to claim sixth on the fifth lap. Lorenzo couldn’t hold Marc back on lap seven even though the pair almost came to blows for the second time and within a further five corners, Stefan Bradl had surrendered fourth to the Spanish juggernaut.

The leading pair trio of Valentino Rossi, Pol Espargaro and Andrea Dovizioso had eked out a slight advantage at the front but once Marquez had clear air, they were quickly reeled in with Dovizioso and Espargaro succumbing to identical manoeuvres at the Dunlop chicane. With a race victory up for grabs, Rossi was expected to provide stern resistance to his younger rival but an uncharacteristic error at turn nine handed an easy lead to Marquez, one he wasn’t going to relinquish.

Rossi comfortably held on to second, confirming his recent resurgence, while Alvaro Bautista produced a magnificent ride to steal the final podium position from Pol Espargaro, passing the rookie ten laps from the finish. Alvaro left Dani Pedrosa and Jorge Lorenzo in his wake as he charged up the order with Dani and Jorge trailing home in fifth and sixth respectively. Stefan Bradl rode a lonely race to seventh while Andrea Dovizioso’s Ducati faded badly to end up eighth, just ahead of Aleix Espargaro and the disappointing Bradley Smith. Cal Crutchlow and Scott Redding finished line astern in eleventh and twelfth as three of the four British riders made it into the points.