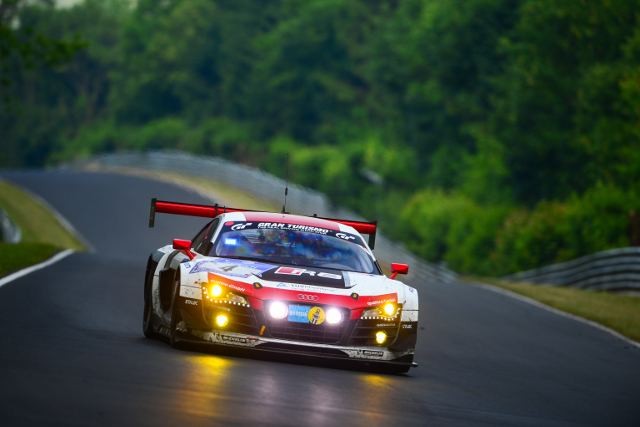 Though Marcel Fassler’s quest to achieve the unprecedented personal feat came to an end after a crash in the opening hour Audi completed 24 Hour victories on back-to-back weekends as Phoenix Racing took victory at the ADAC Zurich Nurburgring 24 Hours.

Though Fassler and the rest of the squad’s #3 team were eliminated early when their Audi R8 LMS ultra crashed heavily at the end of the Dottinger Hohe with Marc Basseng aboard the sister #4 of Christopher Haase, Rene Rast, Christian Mamerow and Markus Winkelhock won though after a tough battle with Mercedes and BMW teams to dominate much of the second half of the race.

Aptly for a race taking place at the same time as the FIFA World Cup penalties played a crucial role in deciding the outcome, the #1 Black Falcon Mercedes team punished for a pitstop that came in under the minimum length at around 7am on Sunday, 15 hours into the race.

Unfortunately their offence arguably robbed the race of the tremendous wheel to wheel battle that had developed between they and the Phoenix Audi. With the two cars on almost identical pit schedules Mamerow in the Audi was set the task of catching Lance David Arnold’s SLS for the lead. Despite spinning on the Grand Prix track he achieved that feat, and with a flourish too as the came across the line to complete 102 laps with the timing unable to tell them apart. Mamerow moved into the lead at turn one, only for Arnold to fight back around the remainder of the 26km lap and for the leaders to come across the line split by nothing once again.

A whole 0.4 seconds separated the leaders on the 104th time past the time in favour of Mamerow in the Audi, but the next time the pair pitted the 34 second penalty levied against the Mercedes was to separate the leaders. They would never come back together, the Audi leading the all of the remaining laps of the race as they completed a race record 159 laps in the 24 hours.

Increasingly over the second half of the race the strongest challengers to the #4 team became the #20 BMW Sports Trophy Team Schubert team, the last remaining Z4 GT3 from the Munich brand’s factory supported four car tilt at the race. While Mamerow and Arnold had been battling side-by-side across the line the #20 team had been running a solitary third but through Sunday’s running became the regular incumbent of second place, pushing the Mercedes back to third, Dominik Baumann taking the position away with a brave move around the outside of Aremburg as the BMW and Mercedes picked different sides to make their ways around a slower car.

The BMW team – Baumann joined by Jens Klingmann, Claudia Hurtgen and Martin Tomczyk – were gradually moving into position to mount a late challenge for the victory. However, penalties would again come into play. Tomczyk, having outbraked himself into turn one dived for the inside of the switchback at turn two crashing into the V6 class #160 Porsche Cayman, breaking the slower car’s rear suspension the process.

For his part in the part in the accident Tomczyk was given a 1:32 stop go penalty. However, that was to be just one problem as the team’s race fell apart in the closing hours. Hurtgen lost control through the Tiergarten section of the track, clattering across the curbs as he spun, bending the suspension in the process. The repair, complicated by the need to remove the front floor, dropped the BMW from second to fourth, losing out to both the #1 Black Falcon team and the #22 Rowe Racing SLS. A further stop, including the time added on for the penalty assessed after Tomczyk’s misjudgement, dropped the car to sixth, losing further ground to the Falken Motorsports’ Porsche and the Aston Martin Racing Vantage GT3.

The AMR team had been fighting back up the order for most of the race after early delays, including a problem with their fuel pump and a small flash fire in the pits. However, consistent and largely trouble free there after they had been able to pick up places as the Nordschleife took its toll.

Rast completed the final tally of 159 laps three minutes ahead of Jeroen Bleekemolen who took the #1 car to the record distance for teammates Arnold, Christian Menzel and Andreas Simonsen. Meanwhile Baumann in the BMW and Pedro Lamy in the Aston were providing the nip and tuck battle for position through the final laps, squabbling over the final place in the top five.

The BMW was the faster of the two. However, on two occasions over the closing two laps just when Baumann was about to make a move his way past was complicated by slower traffic, and unlike his earlier move on the Mercedes the backmarkers proved to be a hindrance, rather than a help. On the final lap a slower car forced Baumann onto the grass, allowing Lamy to escape to fifth place.

The privateer Audi team headed by Marc and Dennis Busch completed the top ten behind the #502 Audi Race Experience team where Felix Baumgartner’s exploits were supporting by Audi legends Frank Biela, Marco Werner and Pierre Kaffer. HTP Motorsports’ Mercedes finished a rather anonymous seventh, theirs another race affected by penalties having been given a three minute penalty for failing to adhere to flag signals during the night, with the privateer BMW Z4 GT3 of Walkenhorst Motorsport powered by Dunlop finished eighth.

Gazoo Racing won the two car SP-Pro class, picking up the class lead after the #11 Wochenspiegel Team Manthey Porsche bowed out after an accident on Sunday morning. The Gazoo Lexus LFA Code X then continued its progress up the order as those ahead were delayed by problems or forced into retirement.

The Haribo Racing Team retired after crashing on the hill up to Hohe Acht, but the Lexus’ final place came at the expense of the #23 Rowe Racing Mercedes which had, itself, fought back up the order after early drama.

They had been one of the unwitting victims of an outbreak of chaos during the opening hour. The race began with Kevin Estre moving from the #66 Dorr Motorsport McLaren from pole position he had won with a new lap record into the lead chased by Maxime Martin. However, when Martin spun on oil left by the Hyundai Genesis Coupe on the approach to the Veedol Chicane on the Grand Prix track it was the start of a destructive few minutes.

On the Nordschleife Estre barged one of the Cup class BMW 235i Racing aside at the top of the Flugplatz crest and while the BMW spun lazily into the wall on the outside of the corner those behind slowed in avoidance. While Thomas Jaeger slowed in the #23 another of the Cup BMWs did not, hitting the rear of the SLS, spinning it to the inside of the track.

The car continued, its rear end held together with a combination of cable ties and tape, and it began making progress up the order until it solidly held a top ten place. However, another accident and more rear end damage dropped the machine back down the order, the team failing to finish after completing 147 laps.

The Car Collection Motorsport Mercedes was another involved in the first hour accidents, spinning on the same oil that had caught out Martin and taking a similar trajectory as it spun across the chicane. However, while Martin ended in the gravel, the Mercedes’ path was interrupted by the #12 Manthey Porsche. The front of the Mercedes was destroyed, ending their race early. The Manthey team, however, were able to repair the damage to their charge, taking 25th place overall.

Martin’s first hour spin was the first part in a troubled race for the BMW Sports Team Trophy Marc VDS team. The sister #26 car lost time to a throttle issue having been one of the participants in the lead changes that characterised the first half of the race. However, within half an hour of each other both of the team’s cars would be out of the race. The #25, having fought back from the early incident, were put out when Marco Wittmann was involved in a crash at Pflanzgarten before Bas Leinders crashed the #26 at Karussell. They followed the #19 Team Schubert out of the race, that team a casualty of an early accident on the GP track which resulted in a destroyed oil pump.

The pair of the Dorr McLarens’ having made such an impression upon the weekend through qualifying and the early stages of the race gradually fell off the pace, initially because of poor fuel mileage before technical issues became the primary concern.

There was later heartbreak for the Team Mathol Racing entered Aston Martin in the SP10/GT4 class. Having led the class for much of the race they were taken out of the race in the closing hours, handing the class win to the Prosport Performance Porsche.

Having led the SP4T class for the early stages of the race Rotek Racing’s Audi TTRS ended the race amongst those teams not to be classified, the class win instead going to the Besaplast Racing Team and their TTRS. Raeder Motorsport took their TT to SP3T class victory.