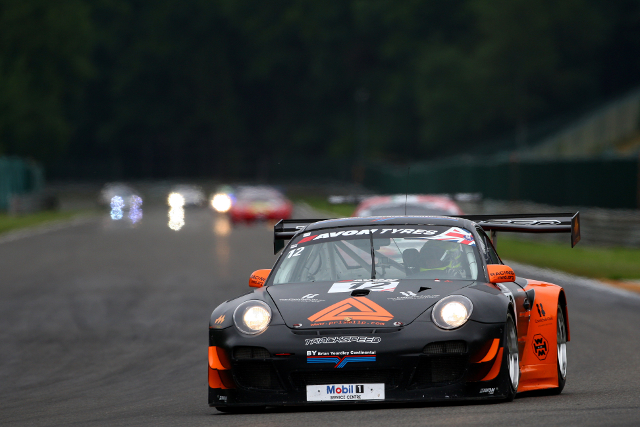 Experienced drivers Firth and Hughes joined together in British GT for the first time this season but, carrying extra weight due to their driver grading, have been unable to get the best out of the Porsche run by Keith Cheetham’s team. Their fourth place finish in the second of the races on the championship’s recent visit to Spa-Francorchamps is the pair’s only points scoring finish so far in the season.

Firth explains the thinking behind the switch; “We went with the Porsche because we had the logic that a rear-engined, torque heavy car should have good traction and thus carry the penalty weight better. We saw Motorbase take two wins in a Porsche last year with the weight and the car was competitive until the final race of 2013. We thought that was the best option for us, and that we’d be alright. Never in a million years did I think the cars or quality would move on that quickly or to that degree, but they clearly have.”

“We’re chomping at the bit for Brands,” he adds “It’s an amicable split from Trackspeed. I regard Keith as a mate now and the guys did nothing wrong. It’s a funny situation, but you have to do what you can to be competitive. We’ve only spent a day with Triple Eight, but we feel like we’re in experienced and capable hands already.”

“We hoped the BMW would be more like the prototypes and give us more reassurance and ability to push courtesy of the aero; it did that in spades,” said Hughes, who raced against Triple Eight during his tenure in the British Touring Car Championship. “I’d go as far to say it’s like no other GT car I’ve driven from that point of view. It generates confidence and we were quickly on the pace on old tyres. We’re hoping to be more competitive with Triple Eight, as the year so far isn’t an accurate reflection of our abilities.”

For the August 30-31 meeting at Brands Hughes and Firth will line-up alongside Triple Eight’s regular drivers Lee Mowle and Joe Osborne, while Derek Johnston and Luke Hines will continue to share the #888 BMW Z4 GT3.

Hughes and Firth’s move to the team will also see them compete in the Nurburgring 1000km – the final round of the Blancpain Endurance Series – as well as December Gulf 24 Hours and the 2015 Dunlop Dubai 24H.

By James Thompson
2 Mins read
McLaren will resume its suspended Driver Development Programme for the 2021 British GT as Team Rocket RJN will enter its four drivers in the GT4 category this season.
British GT