Home Pole for Pommer at the Nurburgring 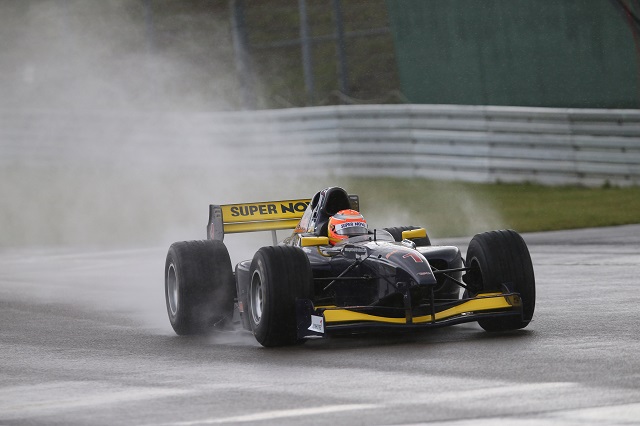 Markus Pommer took pole position for race one of the Auto GP World Series event at the Nurburgring. The Super Nova International driver was able to use his local knowledge of his home track to grab top spot as rain once again played havoc with the on track activities.

Meanwhile, championship leader Kimiya Sato’s chances of securing the title this weekend took a knock, as the Japanese driver was consigned to the pits for the majority of the session while his Euronova Racing mechanics fixed a brake issue, and then when he did get on track he crashed out. He will start eleventh and last for race one.

Pommer will be joined on the front row of the grid by practice pacesetter Kevin Giovesi of FMS Racing, with the Italian the only driver to get within a second of the pole time due to the conditions. Pommer was able to get the best out of the track as the rain hammered down on everybody, with drivers behind him finding conditions far worse than the German had to contend with.

Tamas Pal Kiss continued his strong run with his new Virtuosi UK team with third on the grid, having joined the team just before the previous round in Austria. He will be joined on row two of the grid by female racer Michela Cerruti in the second Super Nova International machine.

Andrea Roda, the most recent race winner in the series, will start race one from fifth position in the second Virtuosi UK machine, with part-time driver Yoshitaka Kuroda sixth for Euronova Racing.

The third Super Nova International machine of Francesco Dracone will start seventh ahead of Michele La Rosa of MLR71 by Euronova, while Giuseppe Cipriani will start ninth for Ibiza Racing Team. Salvatore de Plano of FMS Racing was over fourteen seconds off the pace in tenth, but due to completing a timed lap, will start ahead of Sato on Saturday.

By Paul Hensby
1 Mins read
Dwindling entry levels has forced the 2015 Auto GP season to be put on hold, with this weekend’s round at Paul Ricard cancelled.
Auto GP

By Paul Hensby
1 Mins read
Antonio Pizzonia jumped Facu Regalia at the start and was untouchable throughout to take his second Auto GP win of 2015 at Silverstone.