Jenson Button: “I really don’t know what to expect” 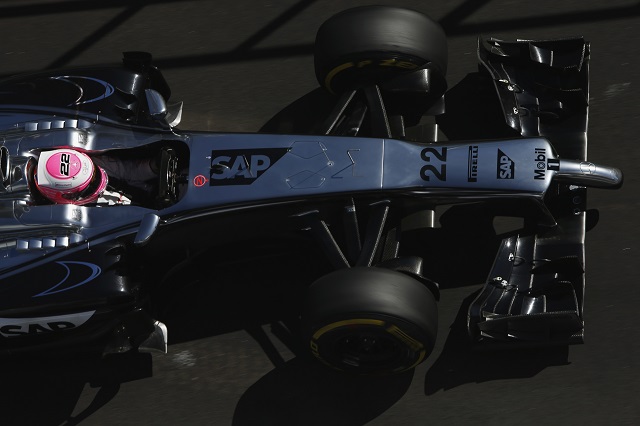 Both McLaren Mercedes drivers qualified inside the top six at Sochi, with Jenson Button fourth and Kevin Magnussen sixth, but after a gearbox change before qualifying, the Dane will drop down to eleventh for tomorrow’s inaugural Russian Grand Prix.

Button was disappointed to go the wrong way with set-up on Saturday morning during free practice but was happy to bounce back with a good qualifying session, and will start fourth for Sunday’s race. He is hoping to get onto the podium, with Valterri Bottas in his Williams the Briton’s primary target.

“We were strong on both Options and Primes [tyres] yesterday, in both FP1 and FP2, but this morning in FP3 we went backwards, even though we weren’t running a lot of fuel,” revealed Button. “With the set-up we’d adopted, the car just wasn’t working for us, but, importantly, we kept our heads after that, worked through the issues, and came to qualifying with a much improved car.

“Tomorrow, I really don’t know what to expect. Our long runs have been pretty good, but it isn’t obvious how many pit-stops most drivers will be making; if you lock up here, however, you’ll completely flat-spot a tyre, and, if you do that, a one-stopper will become untenable, so as I say it won’t be straightforward at all.

“Valtteri [Bottas] is obviously the guy we’ll be trying to pick off from the start of tomorrow’s race. His pace looked good yesterday and today, but Fridays and Saturdays are very different from Sundays.”

Magnussen posted the sixth best time of qualifying but will start eleventh after his five place penalty for the earlier gearbox change, and hopes to make progress during the race in what he feels is a good car that seems suited to the track.

“Today hasn’t been a good day,” insisted Magnussen. “We didn’t get anything out of FP3 – as Jenson says we went the wrong way on set-up – but, even so, this afternoon things felt pretty good for me in Q1 and Q2.

“In Q3, however, the car felt very different. As a result I wasn’t able to get near the time I’d set in Q2, so we’ll need to look into what happened there.

“Overall, though, our pace has been a bit better than usual here, so it’s obviously a shame for us to have been hit with a five-place grid penalty [imposed in respect of a gearbox failure in FP3].

“Even so, I hope we’ll be able to make good progress in the race. It won’t be easy, because we’ll be starting quite far back [P11], but at least overtaking is possible here: moreover, there’s a good DRS zone, and quite a long straight down to Turn Two, and our long-run pace hasn’t been too bad, so all in all I’m fairly positive we’ll be able to make up some positions.”