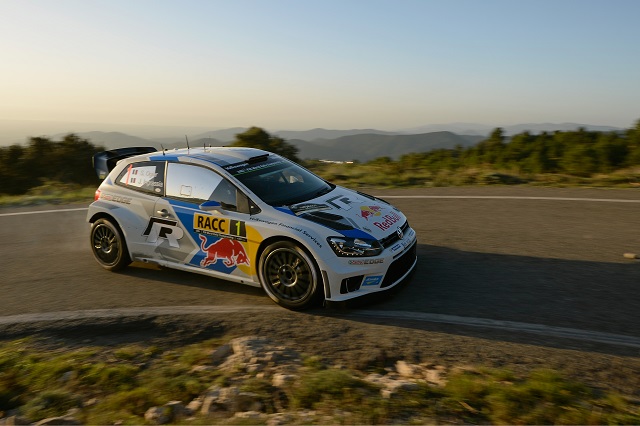 Sebastien Ogier clinched his second World Drivers title this weekend with victory in Spain ahead of Jari-Matti Latvala who pushed Ogier hard until the end of the rally.

Heading in to the weekend Ogier only had to finish ahead of Latvala to secure the title but despite leading for most of the rally his team-mate made sure it went down to the wire as they finished with a 11.3 second gap between them.

While Latvala gave everything he had it was the early gravel stages on the opening day that he struggled with. It wasn’t all plain sailing for Ogier who had a tyre issue on Saturday, which saw him drive 20km on a damaged Michelin.

“It’s a great achievement to win one title but even better to take a second,” said Ogier to WRC.com “It’s a confirmation and proves the first title was not a one-off.

“It’s been a fantastic weekend, but it was tough. I pushed so hard on leg one and it was a long two days on Tarmac where I had to watch Jari-Matti flying. I had to be clever and keep watching him all the time,” he added.

Ogier secured his 23rd career victory with the win in Spain and took Volkswagen on to 11 victories in the season, equalling a record set by Citroen in 2005 and 2008; A victory in the season closing Wales GB Rally would hand them the record.

Mikko Hirvonen returned to the podium for the second time this season in his M-Sport Ford Fiesta RS. Hirvonen battled it out with Andreas Mikkelsen and Mads Østberg over the weekend but a puncture would end Mikkelsen’s charge while Østberg brought his car home in fourth place.

Local hero Dani Sordo would have taken fourth place if it was not for a first-leg error from co-driver Marc Marti which saw them lose 30 seconds.

Mikkelsen would finish in sixth place on the road but a 10 second penalty following a timing error dropped him behind Thierry Neuville.

For the closing day it was looking like Ken Block would take the final tenth place but the self-confessed tyre slayer suffered a punctured front left tyre on the final stage, forcing him to lose out.

By Steven Batey
1 Mins read
Hyundai Motorsport have unveiled its new i20 N Rally2 car that is set to go on sale to customers next year.
FIA World Rally Championship

By Pontus Lindroos
1 Mins read
Andreas Mikkelsen has been seen testing the upcoming 2021 FIA World Rally Championship tires made by Pirelli in a Skoda Fabia R5.