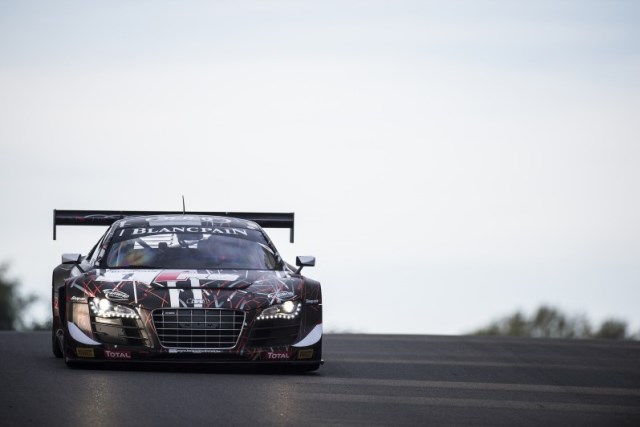 Laurens Vanthoor took victory on his home track of Zolder in the Blancpain Sprint Series qualifying race together with co-driver Cesar Ramos and the WRT Audi team.

Pole-sitter Vanthoor lost the lead to his team-mate Rene Rast on the first lap of the race, but would regain the position when the pair made contact at the chicane, sending Rast into a spin and relegating him down to fourth.

A spin for another of the WRT Audis – the car of debutant Stephane Richelmi and his fellow Moegasque driver Stephane Ortelli – brought out the safety car just as the pit window opened.

Ramos would open up a 16-second advantage in the second half of the race over the new NSC Motorsports Lamborghini entry of Nicky Catsburg and Peter Kox, who jumped ahead of the similar Grasser-entered car of Jeroen Bleekemolen and Hari Proczyk.

“I would like to apologise to the team and to Audi, for this is not the way it should work,” said Vanthoor afterwards about his clash with Rast. “Rene had made a small mistake in the previous corner and I got really close to him.

“I showed myself pretty early and I thought he had seen me. It was not planning to do something crazy under braking, I braked just a little bit later. When I was alongside, he turned in on me. It was probably my mistake, for I was the car behind.”

Proczyk held onto third place under pressure from Rast’s co-driver Enzo Ide and another debut entry – that of Beechdean Aston Martin Racing with Jonny Adam and Andy Soucek.

Championship leader Maximilian Gotz and co-driver Maximilian Buhk didn’t have their greatest race of the season in their HTP Motorsport Mercedes, eventually finishing in sixth after contact with the BMW Team Brazil car of Caca Bueno and Sergio Jimenez at the final corner.