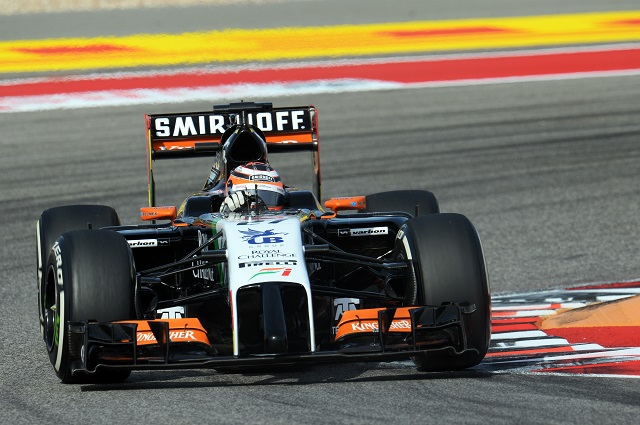 The Sahara Force India team suffered a double retirement in the United States Grand Prix last weekend, but both Nico Hulkenberg and Sergio Perez are looking to bounce back with a good result at this weekend’s Brazilian Grand Prix at Interlagos.

Hulkenberg has a good record at Interlagos, securing pole position for Williams back in 2010 and leading a good proportion of the 2012 race before a dubious penalty for causing a collision with Lewis Hamilton relegated him to fifth. He enjoys coming back to Brazil to race on one of his favourite tracks, and is looking for another strong weekend this season.

“Brazil is always a highlight of my season and it’s one of the events I enjoy the most,” reflected Hulkenberg. “If you look at my record at Interlagos it’s a circuit where I have always performed well. I enjoy the country, the atmosphere, the Brazilian lifestyle and all that surrounds the event seems to have given me a special boost in the past and hopefully it will happen again. Obviously this is a new year and we will need to prepare for this event well: Interlagos can always throw a surprise with the conditions and this could be a challenge for which we need to be ready.

“The track itself is a proper old-school circuit: you don’t have the vast expanses of more modern tracks, everything is bunched up together – it feels almost like a karting track. It’s a very cool layout with some iconic corners, and it has a lot of Formula One history.”

Team-mate Perez heads into the Brazilian Grand Prix weekend already knowing he will drop seven places on the grid for causing the collision with Adrian Sutil on the opening lap in Austin last weekend, but is looking forward to Interlagos nonetheless.

“Interlagos is a great track and makes for a very enjoyable weekend,” insisted Perez. “The circuit is very rewarding to drive in an F1 car – you can attack in almost every corner and it requires absolute commitment. There are quite a few overtaking points and I have had some special battles there in the past. You have some very fast corners and a very complex middle sector: there are changes of elevation, cambers and it’s very twisty, it’s very difficult but it gives you such a great feeling when you get it right.

“Brazil is a great country to race in – the public has a real passion for Formula One and this creates a great atmosphere. The country has created so many big names in our sport, none more so than [Ayrton] Senna: he was fully devoted to racing and was a unique driver and man. You can see his spirit lives on at this track and this is reflected in all the fans in the grandstands. The other thing I always remember about Interlagos is the traffic – it can be a bit of an adventure to get from the hotel to the circuit but it’s all part of the experience!”