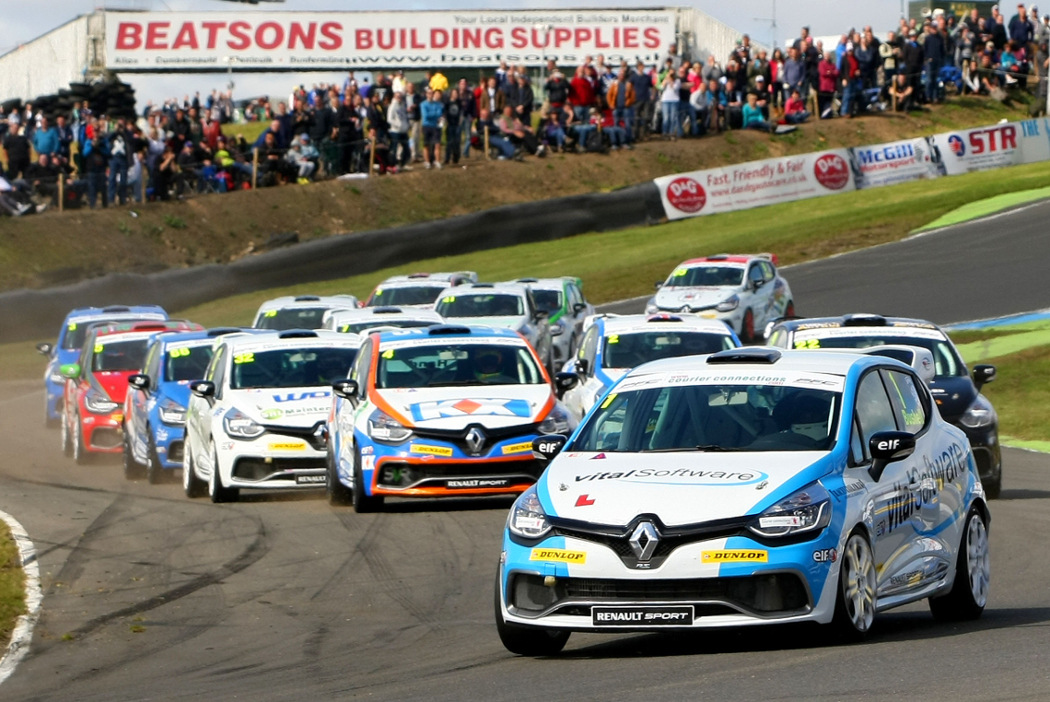 When it was officially announced yesterday that Nic Hamilton would be making his Dunlop MSA British Touring Car Championship debut this season, he became the latest Renault UK Clio Cup graduate to make the step up to the country’s premier tin-top championship.

The Clio Cup, now in its 21st season, has been a key feeder series for the BTCC throughout its spell on the support package, with the championship having firmly established itself as one of the best one-make tin-top championships in the UK.

With the 2015 BTCC season looming into view, the season opener at Brands Hatch just ten days away, TheCheckeredFlag.co.uk have profiled the twelve Clio Cup alumni on this year’s BTCC entry list:

Jackson competed in the Clios for just one season back at the start of the century, with a strong year seeing two race wins secure him fourth in the points. A BTCC debutant the following season, he would only return again in 2007 and has been a front-runner ever since, taking a total of 21 race wins with his family team, RML and then Motorbase from 2010 to the present day.

Turkington made the briefest of appearances in Clio competition during the Winter Series in 2000, finishing fourth in the standings with Mardi Gras Motorsport. Since then, Turkington has become a two-time champion in the BTCC with West Surrey Racing, as well as a race-winner in WTCC, and returns to defend his title this year with Team BMR.

Jordan made a brief foray into the Clios in 2007 to aid the transition from rallycross to touring cars, picking up a second place finish in his first-ever race. Racing primarily for family team Eurotech Racing in the BTCC since, bar a season with Triple Eight in 2009 where he returns this year, Jordan has won 14 races in total, culminating in four top six championship finishes and the 2013 title.

Newsham is the most dominant Clio champion of recent times, his title-winning campaign with Team Pyro featuring twelve wins in eighteen races. Competing in the BTCC since then with five different teams in five seasons now, Newsham has two wins to his name from 2012 with Team ES Racing, plus a podium finish at Knockhill last year in an AMD Tuning Ford Focus.

Tordoff Is A Big Fan Of Snetterton, Taking His Maiden Clio And BTCC Wins There – Credit: Jakob Ebrey Photography

Tordoff was a front-runner in the Clio’s throughout 2009 and 2010, the latter year seeing twelve podiums in eighteen races put him third overall. A race-winner in the Porsche Carrera Cup GB in the next two years, Tordoff has competed in the BTCC since, a couple of years and two race wins with Triple Eight MG leading to switch to West Surrey Racing this year.

While Smith couldn’t pick up a podium finish during his spell in the Clio Cup from 2008, he certainly came close as a regular top six finisher. After a one-off debut in 2010 with Triple Eight, Smith joined the BTCC full-time in 2011 with Eurotech Racing, taking one podium finish so far in their Honda Civic in 2013, a team and car he returns to this year after a season out in British GT.

Hamilton competed in the Clio Cup for two years using a specially-modified car, with the 22 year old having been born with Cerebral Palsy. His debut season featured three top ten finishes, with a best of eleventh following in 2012. After making some ETCC appearances the next year, Hamilton spent 2014 on the sidelines, but now returns to racing by making his BTCC debut in an AMD Tuning Audi S3.

Smith spent five years in Clio competition before moving to the BTCC in 2012, with four seasons in the UK series and one in Italy culminating in three wins and second in the points in 2011. A race-winner at the end of his debut BTCC season with Airwaves, Smith notched two more wins last year after switching to Team BMR, with whom he remains for 2015.

Goff enjoyed a three year spell in the Clios with leading outfit Team Pyro, top six finishes in 2010 leading to race wins a year later and then the title in 2012. Joining the BTCC the following year, some impressive showings with Team. HARD and then Team BMR, including a podium in the 2013 finale, has led to plum manufacturer MG seat for the upcoming campaign.

Belcher was a midfield battler during his two year spell in the Clios with his own Handy Motorsport outfit, earning himself end-of-year silverware on both occasions with Masters Cup titles. That led to a strong maiden BTCC season last year in which he showed consistent and improving pace in a Toyota Avensis, though sadly his most memorable moment was a mammoth Thruxton crash.

Bushell’s started his Clio career as a privateer in 2012, with a late podium that year followed by three rostrum finishes during a three team 2013. A move to Pyro last year produced a long-awaited maiden win, with three more helping him snatch the title and a BTCC drive in an AMD Tuning Ford Focus for the upcoming campaign.

Like the man who pipped him to the title last year, 2012 Graduate Cup winner Cook’s outright title challenge came in his third year in the class. Cook led the standings for the majority of 2014 with six race wins, but a tough end to the year meant he lost out, but his performance still earned him a #RacingforHeroes-backed Power Maxed Chevrolet BTCC drive.

A host of drivers on the 2015 Clio Cup grid will be holding BTCC aspirations for 2016 and beyond, aiming to follow in the footsteps of those mentioned above. Here’s our pick of those to watch:

From L to R: Can Stilp, Sutton or Smith be the next Clio graduate in the BTCC? – Credit: Jakob Ebrey Photography

Having seen the two drivers who finished above him in the Clio Cup last season, Bushell and Cook, move up to the BTCC this year, Stilp must feel he’s got what it takes to make the graduation in the near future. After taking three race wins and the Graduate Cup last year, Stilp returns as a title favourite in his third campaign this season with 20Ten Racing.

Whilst Sutton has yet to compete in a single Renault UK Clio Cup race as he prepares for his maiden season in the category, his status as a bright young talent following a race-winning Formula Ford campaign last year and a Clio drive with BTCC outfit Team BMR puts him on the radar as a potential BTCC racer should he adapt well to the new discipline.

Like Sutton, Smith has ties to an existing BTCC outfit, though for Smith it is through his family with his father Jeff Smith currently racing for 2013 champions Eurotech Racing. Smith is also making his Clio Cup debut this season, but the 22 year old has hinted at his potential after winning races in the Michelin Clio Cup Series last season and has a plum seat with reigning champions Pyro.

They aren’t the only ones though, with Paul Rivett having been top of the Clio Cup grid for over a decade now, with three title successes so far having led to many calls over the years for him to step up to the BTCC.

Rivett himself has tipped his former WDE Motorsport team-mate and now Team Cooksport racer Charlie Ladell as a future tin-top star, whilst the likes of Ant Whorton-Eales, Ash Hand, Rory Collingbourne and Dan Holland are other young chargers with eyes on the BTCC in the future.

Why is the Clio Cup such an ideal feeder series though? Well we’ll leave that to alumni Mat Jackson and Aron Smith to explain, with a helping hand from a few other former Renault talents: