Breen Takes Second Win of The Season On Circuit Thriller 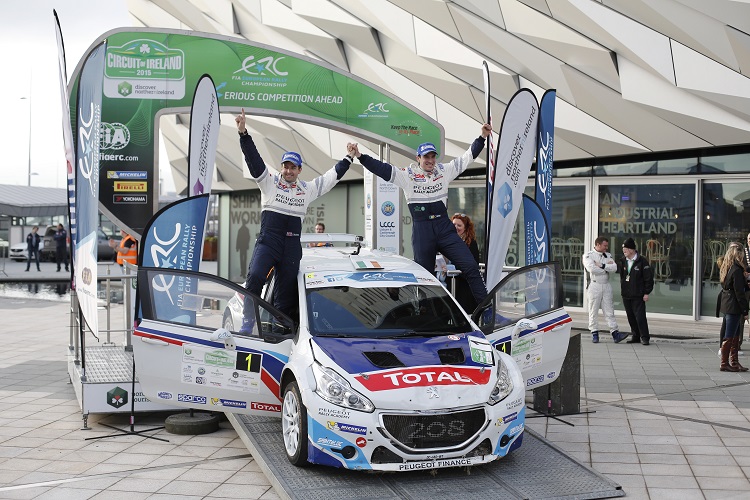 Peugeot Academy driver Craig Breen achieved a lifetime dream by winning the Circuit of Ireland Rally. round three of the FIA European Rally Championship. The Irishman took the win by 6.4 seconds over series rival Kajetan Kajentaonwicz, while Combilift Rallying’s Josh Moffett was third.

After a great battle on the morning stages  the battle for the lead could not have been closer. Robert Barrable, Breen and Kajetanowicz were all separated by just 13.5 seconds with any of the three capable of victory. The first two stages of the afternoon were the two 1.12 km Lisburn street stages with Barrable winning the first and Breen taking the second, the gap was only 1.2 seconds with four stages to go.

Such was the level of competition between the top two that they were separated by only 0.2 of a second over stage 15 but drama was to follow on the following test as Barrable crashed out of the lead ending what had been a nail biting fight. Kajetanowicz moved into second 19.8 seconds off the lead and by no means out of the running. Josh Moffett inherited third place as he looked to maintain his lead to his brother and team-mate Sam Moffett who he led by 37 seconds.

The drama was not over as on the penultimate stage Breen suffered a high speed spin shortly after the start of the test and ripped the front bumper off the car. The Irishman was able to continue but by the end of the stage his lead had been cut to five seconds serving up a tantalising final stage.

However any chance of a last stage lead change were not to be as Breen won the test by 1.4 sealing his victory.

“I’ve been concentrating on this event for 25 years since I was born and more closely for the last couple of weeks.” said Breen after the event.  “I wanted to win this so badly, I can’t express in words how much I wanted to win it.

“Now to the come to the end to get the trophy and see all the names that went before me it just beggars belief in my eyes. Perhaps to some other people it’s just another rally but for me it just means so, so much.”

Kajetanowicz took the runners up spot and €7000 in prize money  while Josh Moffett secured third place. In ERC 2 it was Krisztian Hideg who took the win with David Botka in second.

The next round of the FIA European Rally Championship takes place in Portugal starting on June 4.

By Steven Batey
1 Mins read
Adrienn Vogel recently tested a Skoda Fabia R5 for the first time ahead of a potential FIA European Rally Championship campaign in the car this season.