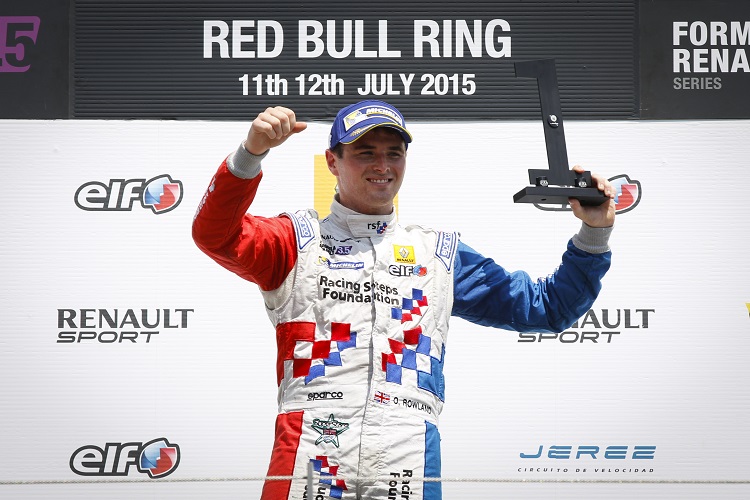 Oliver Rowland led from start to finish in the opening race of the weekend at the Red Bull Ring to take his fourth victory of the season and to open up his lead in the championship.

The race was affected by two safety car periods and ended with drama as Roberto Merhi slowed down significantly after seeing the chequered flag, with Nicholas Latifi crashing into the back of the Pons Racing driver while racing Tom Dillmann to the line. Both drivers were able to emerge unscathed from the incident, though significant damage was caused to both cars, with Latifi rolling across the track before coming to a stop.

Racing Steps Foundation-backed Fortec Motorsports driver Rowland got a good start of the race to lead into the first corner, but fellow front row starter Marlon Stockinger and his Lotus team-mate Matthieu Vaxiviere from third on the grid got lacklustre getaways, with DAMS duo Dean Stoneman and Nyck de Vries climbing into second a third.

On the run down to the second corner, Meindert van Buuren lost control of his Pons Racing machine after appearing to be edged onto the grass by Jazeman Jaafar’s Fortec Motorsports machine, spinning across the track and colliding with the AVF machine of Alfonso Celis Jr and the Jagonya Ayam with Carlin machine of Sean Gelael, eliminating all three drivers on the spot and bringing out the first safety car.

The second safety car was called upon to retrieve the stranded Tech 1 Racing machine of Roy Nissany, who had stopped on the approach to the penultimate corner of the Red Bull Ring circuit.

Rowland was able to judge the restarts perfectly, not allowing Red Bull Junior Stoneman even a sniff of being able to take the lead, eventually pulling out a substantial 8.375s lead by the chequered flag. Stoneman was likewise able to pull a gap on team-mate de Vries, who completed the podium places.

Merhi initially finished fourth on the road before his post-race crash, but already had a ten-second time penalty for excessive track limits offences that put him down to eleventh, ironically promoting Latifi to fourth ahead of Dillmann.

All three drivers were able to make moves on Vaxiviere, who could only finish down in sixth, just ahead of Strakka Racing’s Gustav Malja, while Tech 1 Racing’s Aurélien Panis held off the challenge of the second Strakka of Tio Ellinas for eighth. Merhi’s penalty promoted Jaafar into the top ten for the final point.