Sykes Shines Under the Lights at Losail 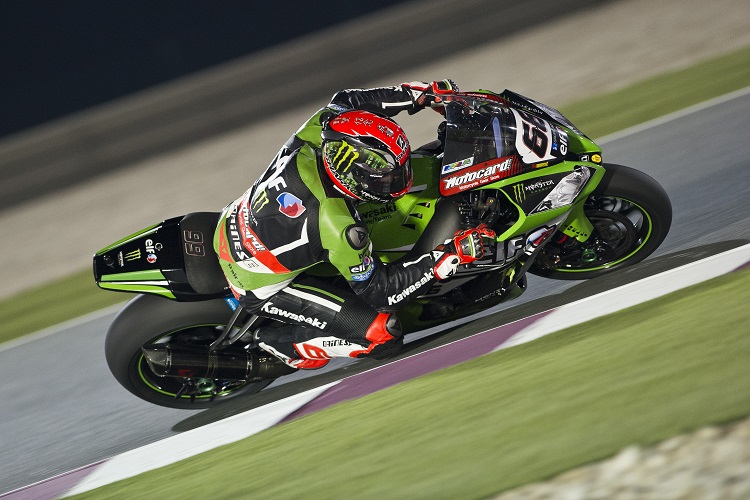 Tom Sykes completed another season of Superpole supremacy by claiming his sixth pole position of 2015 under the floodlights in Qatar. The Yorkshireman led a Kawasaki 1-2 ahead of world champion Jonathan Rea with Ducati substitute Xavi Fores producing a stand-out display to join the ZX-10Rs on the front row.

On a circuit which served Aprilia so well in the final round last season, Jordi Torres headed into Superpole among the favourites having topped free practice. The Spaniard remained competitive when SP2 got underway, trading fastest times with Sykes, but the switch to qualifying tyres saw the leaderboard shaken up.

Leon Haslam was the first of the leading contenders to register a lap time on the softer rubber and his 1:57.449 was enough to briefly lift him onto provisional pole. Unfortunately for him, his joy only lasted a matter of seconds as Chaz Davies cut the beam four hundredths quicker but Rea soon put their laps into perspective with the first sub-1:57 lap of the evening.

Fores had locked himself onto the rear wheel of the new world champion and leapt up to second but Sykes would have the final say, setting a 1:56.821 with the final lap of the night to snatch pole from under the nose of his teammate. Fores’ reward for his clever tactics was a first ever front row start with his teammate, Chaz Davies, forced to line up fourth.

The Aprilias of Haslam and Torres will start fifth and sixth after the Spaniard failed to maximise the grip available from the qualifying tyres while Suzuki pairing of Alex Lowes and Randy de Puniet also line up together in seventh and eighth respectively. Michael van der Mark starts ninth for PATA Honda ahead of Leandro Mercado but Matteo Baiocco will be unable to take up his eleventh place grid slot after an injury sustained in an SP2 crash.