It was a storming season for the Eurocup Formula Renault 2.0 Series, with eight drivers remaining in contention for the championship up until the final weekend of the season, with Jack Aitken clinching the title in the final race.

Aitken leapfrogged long time championship leader Louis Deletraz after taking two of the three race victories at the Circuito de Jerez, while Kevin Jörg, Ben Barnicoat, Anthoine Hubert, Jake Hughes, Ukyo Sasahara and Dennis Olsen all had an opportunity of the title heading into the finale.

Sasahara and Olsen were eliminated after the first race of the weekend, while Barnicoat, Hubert and Hughes saw their chance of the title gone after race two, leaving Aitken, Deletraz and Jörg to fight it out for the finale.

Both Deletraz and Jörg needed to win the race and hope Aitken had a disappointing race, but whereas Aitken did not score, Deletraz could only finish sixth while Jörg gambled on wet tyres hoping for the rain that never came, handing Aitken the title. 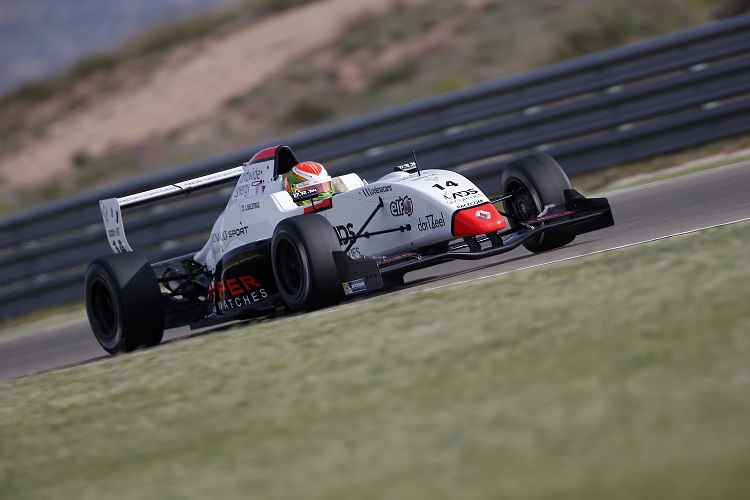 The Race for the Title

Deletraz began the season on fire, winning the first two races of the year for Josef Kaufmann Racing at Motorland Aragon, and left the Spanish circuit with the championship, with Olsen winning his first and only race of the season in race three for Manor MP Motorsport.

Barnicoat, Jörg, Hubert and Darius Oskoui all saw podium finishes as well at Aragon, proving just how open the season would prove to be in 2015.

Sasahara secured his maiden Eurocup victory in race one at Spa-Francorchamps for the ART Junior Team, ahead of Hughes and Hubert, while race two saw Hughes take his and Koiranen GP’s first victory of the season, with Sasahara again on the podium ahead of Matevos Isaakyan of JD Motorsport.

The second race at Spa saw Deletraz forced into his only retirement of the season when he was hit by Olsen at La Source early in the race.

Aiken secured his first victory of the season in race one at the Hungaroring in his Koiranen GP entry, with his fellow Briton Barnicoat finishing second for Fortec Motorsports ahead of Deletraz, while Deletraz led a Josef Kaufmann Racing 1-2 finish in race two ahead of Jörg, with Hughes in third.

Aitken led a British 1-2-3 finish in race one at Silverstone ahead of Harrison Scott of AVF and Hughes, with Jörg taking his only victory of the season in race two ahead of Koiranen GP duo Aiken and Hughes, while race three saw Hubert secure his maiden victory for Tech 1 Racing, with Jörg and Sasahara completing the podium.

Aitken secured his third victory of the season in race one at the Nurburgring ahead of Sasahara and Isaakyan, with Barnicoat securing his and Fortec Motorsports’ first victory of the year in race two ahead of team-mate Martin Kodric and Hubert.

Barnicoat won again in race one at Le Mans, with Jörg and Deletraz completing the podium for Josef Kaufmann Racing, while Hubert secured a home victory in race two ahead of Olsen and a second Tech 1 Racing entry of Simon Gachet.

Deletraz arrived at Jerez in the lead of the championship, albeit on count back on the number of wins over team-mate Jörg, with Aitken only a handful of points behind. Aitken secured victory in race one to assume the championship lead himself, with Jörg and Ignazio D’Agosto of Manor MP Motorsport completing the podium.

Aitken moved further ahead after his second victory of the weekend in race two, with D’Agosto second ahead of Barnicoat, while Barnicoat ended the year with victory in race three, with Hubert second and D’Agosto again on the podium in third.

Deletraz’s failure to win and Jörg’s gamble on wet tyres ensured Aitken’s failure to secure points after a spin in qualifying saw him start at the back of the field did not come back to haunt him, with the Briton claiming the title by thirteen points from both Josef Kaufmann Racing drivers.

Barnicoat’s three victories during 2015 saw him finish fourth in the standings ahead of Hubert, with Hughes sixth ahead of Sasahara, Olsen, D’Agosto and Isaakyan.

Kevin Jorg finished third in the championship after winning once at Silverstone (Credit: Alexandre Guillaumot / DPPI)

Whereas the battle for the championship went down to the wire, there were a number of impressive performances during the season lower down the field.

Darius Oskoui started the year with a podium in the very wet final race at Motorland Aragon for the ART Junior Team, while Matevos Isaakyan secured two podiums of his own for JD Motorsport at Spa-Francorchamps and the Nurburgring.

Talking of Daruvala, he was part of one of two big accidents at Silverstone, all involving Fortec Motorsports drivers, with the Indian rolling to a stop on top of a barrier after a clash with Barnicoat, while fellow wildcard entry Ferdinand Habsburg had an even bigger crash later in the lap, when he also collided with Barnicoat and team-mate O’Keeffe and was launched high into the air.

By Tom Jackson
4 Mins read
The 2019 British F4 Championship was one of the most closely contested seasons yet, with a title fight that went down to the very last race.
General Formula 3Season Review