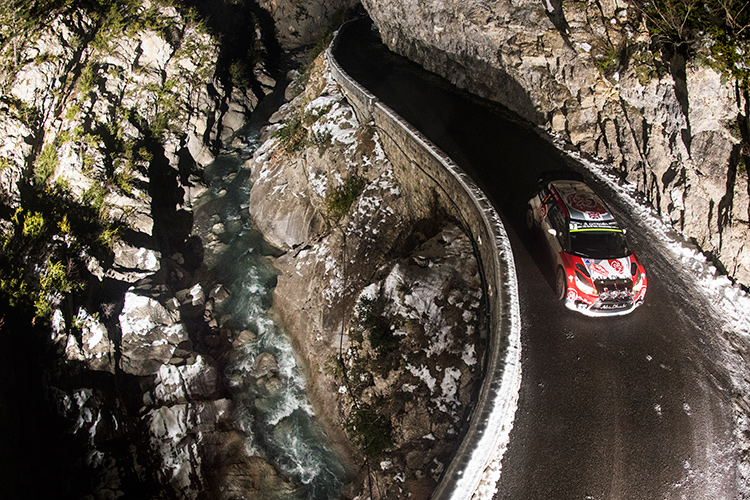 The FIA World Rally Championship is back as Rallye Monte-Carlo kicked off the 2016 season with two night stages and ended with Kris Meeke topping the time sheets overnight with impressive pace.

Stage 1 saw, what some might say, a victory by the defending champion Sébastien Ogier as he took his Volkswagen Polo R WRC through the 21.25 km test in 12:21.9, and while it was looking like it would be another VW dominattion Meeke popped up in second place, just 4.1 seconds behind Ogier.

Following the stage Ogier would say that he took a cautious approach, “The conditions are not too bad but still some places are slippery. I could go faster but I prefer to go like this.”, Meeke however was pushing hard and believes that he could have taken a stage victory if it wasn’t for a spin, “The car feels great but I spun at a hairpin near the start. I had to turn the car around 360 degrees. That cost me maybe 7sec.” said the Northern Irishman.

The second stage saw Meeke push on, setting a stunning time of 13:06.1, this would be good enough to take stage victory over Ogier by 11 seconds, and in doing so took the overall lead by 6.9 seconds to head the times overnight.

After finishing the first stage in fourth place, Jari-Matti Latvala lost time on the second stage after hitting a rock, finishing tenth, dropping him to seventh place overall. “We hit something on the first proper icy place,” said Latvala. “Suddenly we started to slide and we hit a stone or something. I thought we had damaged the suspension so I backed off. We’ll get back to service. It’s okay.” he added.

Andreas Mikkelsen had no issues with a change in co-driver over the winter as he secured third place on both stages to end the first day in third place, just 20 seconds down on leader Meeke. The Norwegian was fairly happy with the evening’s work but felt he could have pushed a little harder, “Okay but maybe too cautious on the descent. I must thank my ice crew – I can really trust my notes. Patches of ice and snow approaching the end.” he said at the end of the stage.

Thierry Neuville lead the Hyundai charge in the new generation i20 WRC, finishing the evening in fourth place overall; The Belgian driver complained of visibility problems after the first stage, “Okay, but I have a lot of dirt on the windscreen and it wasn’t easy to see. There’s a lot of loose stuff on the road now and it’s very slippery. For the first stage with the new car through it was okay.”

It would be the older i20 WRC driven by Hayden Paddon that would be next up in the overall standings after a disappointed Dani Sordo ended the day in tenth place, “Very slippery. I didn’t attack too much. I didn’t feel I drove too well. Everything is different.” said the Spaniard.

Mads Østberg found the start to the new season tougher that expected as he took the M-Sport Ford Fiesta RS WRC to fifth place at the end of the day. “The conditions were quite tricky. My gravel notes were perfect but I struggled a bit. Now in stage mode I struggle a bit to understand my pace notes. It’s going to take some time to get used to that.” said Østberg. His M-Sport compatriots found things a little harder, new boy Eric Camilli ended the day in twelfth place, just ahead of Bryan Bouffier.

Robert Kubica ended the day as the highest private entry in eighth place but felt like he was struggling with mechanical problems,  “Generally the feeling is okay but since shakedown I have had some doubts about the power of our car. I was driving well and I don’t know where I’m losing the time.” said the Pole.

In WRC2 Elfyn Evans dominated the pace, finishing an impressive 26.7 seconds up on Quentin Gilbert on SS2, unfortunately the Welshman had lost time in SS1 with a puncture. “I don’t know what happened. There were no cuts but it went down straightaway and I’ve driven 15km on it.”  The M-Sport driver was also left frustrated on SS2 as he caught, but couldn’t pass Quentin Giordano.

Julien Maurin set the pace on SS1 in his Škoda Fabia R5 but after a slower time on the seconds stage, dropped to second place overall. Quentin Gilbert heads in to the second day with a 9.8 second advantage over Maurin.

Elsewhere in the field 1994 Rallye Monte-Carlo winner Francois Delecour took his S2000 spec Peuegot 207 to eighteenth place overall, an impressive task against the more modern machinery, after the first stage he commented, “No problem but we are starting very far down the order and that’s a big disadvantage in the dirty conditions. We caught the car ahead so we lost more and more time.”