2016 BritishRX Promises To Be Truly Epic

2016 BritishRX Promises To Be Truly Epic. With the season opener at Croft less than a week away excitement and expectation around the British Rallycross Championship couldn’t be higher.

Earlier in the year it was announced that the format in which the event is to be run will change and follow the same format as WorldRX.

But the change in format is only the beginning of what looks to promise a truly epic year of Rallycross in the British Championship. The list of Supercar drivers and teams stating intentions to contest a full British championship is most exciting.

Julian Godfrey will without a doubt be quietly out to clinch a record breaking sixth title. The only question is who will be out to stop him? The answer to that is very hard question to answer as there are so many possibilities!

Pat Doran has committed to the full season driving a Citroen C4 that Liam Doran drove to X-Games gold. Olly O’Donovan must surely start the season as one of the favorites after his top 10 European 2015 season. Albatecs James Grint has also announced an assault on the title. After a highly successful 2015 racing in the European championship, his first in a supercar, he has undoubtedly gain valuable experience at the highest level.

Crowd favourite Kevin Proctor has also announced he will be driving in select rounds of the championship this year. Currently there has been no news from Steve Harris, Andy Grant, Steve Hill, Steve Mundy, Mark Flaherty or Mad Mark but all are expected to be racing again this year. 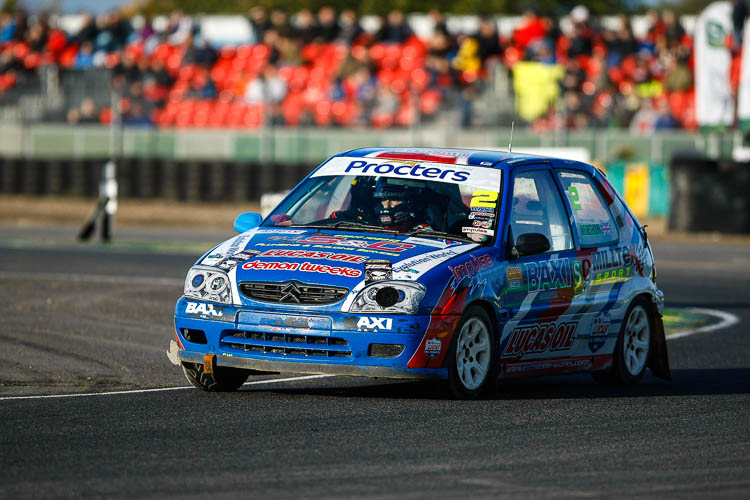 There is also a plethora of newer drivers that will be lining up on the supercar grid this year. Among them BTCC power house team Power Maxed Racing has announced that Dave Newsham will concentrate on Rallycross this year! Dave’s driving pedigree is well known, his first taste of Rallycross was behind the wheel of XtremeRX’s Hot Hatch Citroen Saxo at the Rallycross Grand Prix in 2014.

2015 Supernational champion Dan Rooke will also make the step up to Supercars in a LD Motorsport Citroen DS3.

Any of the 3 new comers will be more than capable of taking a victory. Is this really going to be the season that will be too close to call?

In total there will be a 16 strong Supercar entry at Croft, according to the entry list on the championship website.

In other classes the news is just as encouraging. Supernational, which has become almost impossible to predict over recent years promises the usual mix of car and driver. One to most definitely watch will be Tony Lynch, he will be driving The Ford KA that Gareth Wood drove to a championship second place in 2015. Paige Bellerby will also be hoping to continue the form she found at the end of 2015.

Is this the year that Super1600 finally takes off in the UK? It has every sign that it may well do. Defending champion Craig Lomax certainly hopes so, he will be joined by Suzuki Swift double champion Tristan Ovenden, Phil Chicken and Micheal Boak all looking for glory. Paul Coney is developing a completely new build which should make an appearance at later rounds. News from Andy Knowles and Mike Jones about any plans for this year is currently unknown.

The Hot Hatch class which has been dominated by Polish drivers in recent seasons has a new face in the guise of Graham Rumsey, the Kent based driver will be a new name to most unless you come from a Karting back ground, he certainly comes with a racing pedigree and could spoil the Polish strangle hold on the title.

BMW Minis look to field the strongest field for a while as well David Bell will look to defend his 2015 crown in a class finding a new found popularity and will probably attract bumper grids during this year.

The ever popular Suzuki Swift will without a doubt also be wide open even though 2015 championship Tristan Ovenden has switched to S1600 and other front runners Darren Scott and Rob Maynard will sit this year out, however this won’t dilute the racing one bit Aiden Hills, Jack Brown and Nathan Heathcote will certainly all have their eyes on the prize this year. The new drivers could certainly turn a few heads. Watch out for National Hot Rod supremo Martin Dalzell making his debut in Rallycross.

Round 1 gets underway on 6th March at Croft circuit in Yorkshire. Don’t worry if you can get there as a TV deal with BT sport has been announced this year!