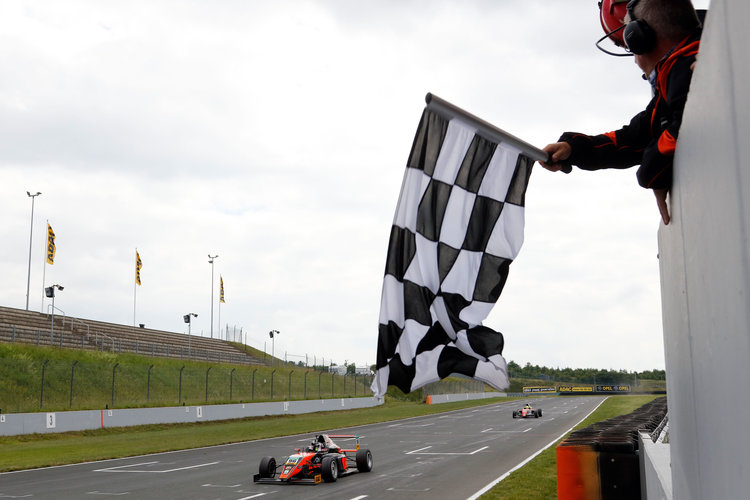 As the ADAC Formula 4 field look ahead to the next round, Joey Mawson celebrates the fact he left Oschersleben as the half-time champion. The title will increase the pressure on the Australian as he looks to improve on his 2015 record.

Although he registered a retirement in the final race of the weekend, Mawson left the weekend with 202 points, 20 more than second place Mick Schumacher.

The weekend started strongly with Mawson beating his rival off the line. He made the most of the opportunity, getting past Thomas Preining a few laps later. The pole sitter had fought a strong race and was able to hold off Schumacher as Mawson took the win.

The second race couldn’t have gone much better with Mawson completing a ‘hat trick’ to comfortably win in front of Schumacher. Unfortunately for the Australian, he was unable to complete the rare feat of a reverse grid win.

A poor start in the final race saw him drop back before a collision with Jannes Fittje put them both out of the contest. With Schumacher and Mike Ortmann also failing to score any points, his championship lead was not eroded.

The only front running driver to benefit from the final race was Kim-Luis Schramm. The German kept his calm to comfortably win after a difficult safety car and red flag period. The win pushed him up to third overall, ahead of Ortmann and Fittje.

Mawson had commented earlier in the weekend that; “Oschersleben seems to be a special place for us,” though he’ll be aware of the challenges that are yet to come. The Red Bull Ring will greet the field as they reorganise at the end of July. Last season Mawson picked up his first win of the season there and will need to hope for similar success.

Schumacher meanwhile, knows that he’ll need a strong second half if he’s to challenge his 2015 van Amersfoort Racing team-mate.

“I am very disappointed about what happened in race three, and this kind of overshadows the race weekend in Oschersleben.” said Schumacher. “Two podiums in the first two races are okay, but I am now leaving the weekend behind and will start concentrating on the next races to come.”

In the rookie championship, Schumacher’s Prema Powerteam colleague; Juan Manuel Correa leads the standings on 179 points. He takes the rookie lead after Felipe Drugovich retired in the final race, putting him six points down.