Algarve Pro Racing’s Andrea Pizzitola, Andrea Roda and Aidan Read claimed their first Asian Le Mans Series crown after what was only their first victory in the 2016/17 championship at the final round in Malaysia.

Going into the race they were trailing long-time points leaders Jackie Chan DC Racing by 18 points, and claiming pole position saw them take the early initiative going into the four hour race.

It would get even better for the Algarve-based team as Ho-Pin Tung, who started the DC Oreca 03R was crashed into by Giorgio Maggi in the Race Performance Oreca at the first corner of the very first lap. Tung limped the car back to the pits with what was later diagnosed as damaged head gasket, but strong work from the mechanics couldn’t stop the engine from giving up the ghosts when they tried to get out later in the race.

After that it became very much the Ligier show as the #24 Algarve machine of Michael Munemann, Tacksung Kim and Mark Patterson took up position as the number one threat to the sister #25 but their relatively slow pace in comparison to Fabien Schiller and latterly Struan Moore in the Race Performance car as they left it to the final stint to get into second place. However, they left it too late to mount a reasonable challenge to the leader.

The battle was also tight in LMP3, with the battle in the junior prototype class also being determined by collisions. Coming out on top, and receiving an invite to their first Le Mans, was Tockwith Motorsport whose pairing of Phil Hanson and Nigel Moore kept themselves in the clear to set up a late chase down of the G-Print by Triple 1 Racing Ligier. They chased with aplomb and crossed the line ten seconds ahead of Hanss Lin.

That doesn’t tell the whole story though as the championship leader going into the race, the #4 ARC Bratislava Ginetta of Darren Burke and Konstantins Calko, found themselves at the rough end of a Ferrari stick as a collision with a GT car saw them rolled back into the garage early doors with a damaged-linked battery isolator problem. The #7 sister ARC Ginetta also had a remote shot at the title, but hit problems of it’s own and finished well down in 21st – a place behind the #4.

GT saw a surprise winner as the Team Audi Korea Audi R8 LMS of Kyong Ouk You, Marchy Lee and Alex Yoong held the balance of power over the #3 DH Racing Ferrari 488 and finished 12 seconds behind with their driver line-up of Rino Mastronardi, Alex Riberas and Olivier Beretta.

Claiming the crown was the sister DH Ferrari of Stephane Lemeret, Michele Rugolo and Matthieu Vaxiviere. The team’s fifth place finish saw them win the title, and an entry into the GTE-Am class at Le Mans, because their title rivals failed to take victory. 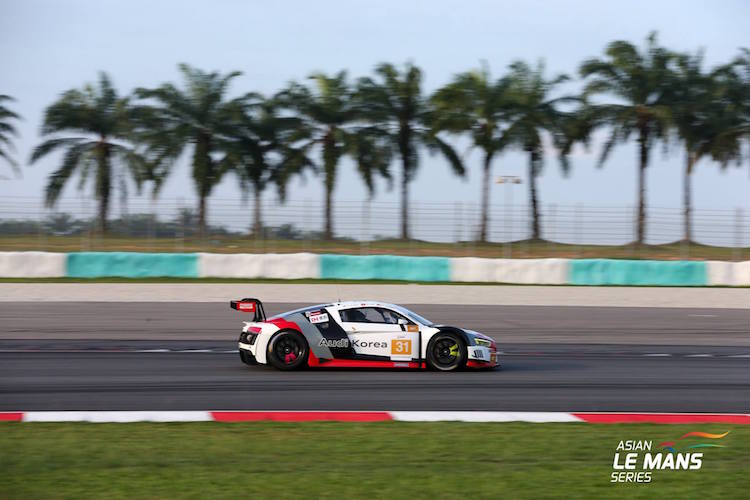