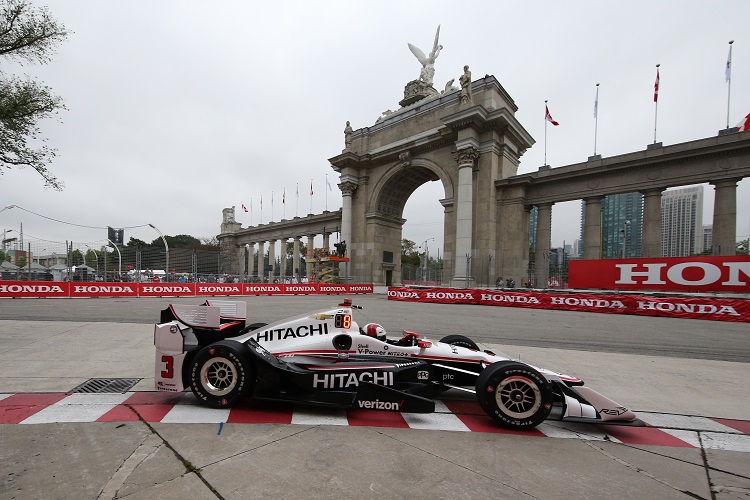 A week after claiming his first Verizon IndyCar Series victory in three years at Iowa Speedway, veteran Brazilian Helio Castroneves set the fastest time as practice got underway around the streets of Toronto, IndyCar’s annual trip north of the border.

Castroneves set a best time of 1:01.1211s during the 45-minute session, and led a Team Penske 1-2-3 ahead of team-mates Josef Newgarden and Simon Pagenaud, although the fourth member of the team and the defending race winner, Will Power, languished down in sixteenth.

Newgarden jumped ahead of Pagenaud late in the session, but the young American was 0.3887 seconds down on Castroneves, with reigning series champion Pagenaud a further 0.0347 seconds back.

Scott Dixon was the best non-Penske driver in fourth, with the championship leader 0.5829 seconds down on Castroneves’ pace for Chip Ganassi Racing, while Graham Rahal ended the session in fifth for his fathers Rahal Letterman Lanigan Racing team, 0.6025 seconds back.

Marco Andretti was bumped out of the top ten in the closing stages, as was Max Chilton, who fell to fourteenth after spinning at turn eight late in the session, which required the marshals to restart him.

USF Juniors formed for 2022, first step in Road to Indy

By Justin Nguyen
2 Mins read
The USF Juniors, débuting in 2022 and founded by Andersen Promotions, will be the fifth and lowest rung on the Road to Indy.