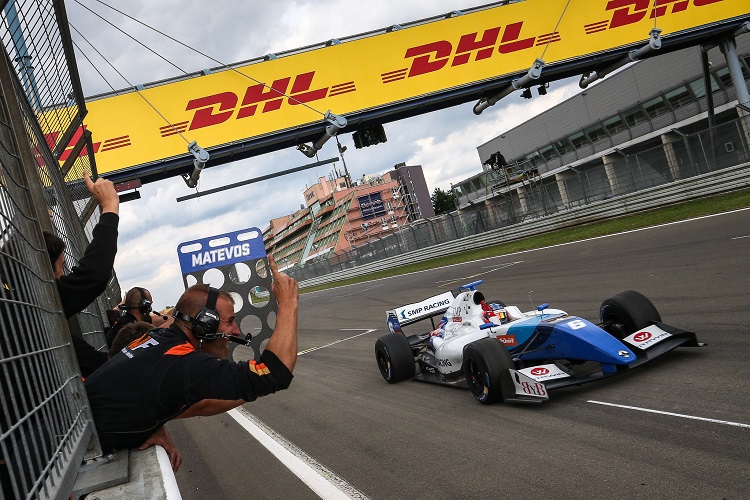 Matevos Isaakyan jumped into the lead at the start of the opening race of the weekend at the Nurburgring and was thereafter untroubled to take his second victory of the season on Saturday.

However there was disappointment for poleman and series debutant Alex Palou, who finished outside the points in eleventh after a first lap clash with fellow front row starter Pietro Fittipaldi at turn three that required a trip to the pits for a new front wing.

Isaakyan started third on the grid for his SMP Racing by AVF squad, but was able to get in between the front row starters before turn one, and once Fittipaldi and Palou had collided, he was more than two-seconds clear of Alfonso Celis Jr by the end of lap one, and from there on, he continued to extend his advantage, ending the race with a 6.357 second advantage.

Celis Jr likewise was untroubled throughout the race, with the Fortec Motorsports driver 12.788 seconds clear of third placed Egor Orudzhev, with the Russian holding off the advances of RP Motorsport’s Roy Nissany to give SMP Racing by AVF a double podium finish.

Yu Kanamaru finished fifth for RP Motorsport after a good defensive drive ahead of Lotus driver Rene Binder, while Fittipaldi could only take seventh following his first lap tangle with Palou.

Diego Menchaca took eighth for Fortec Motorsports, just ahead of Konstantin Tereschenko, while Damiano Fioravanti drove a lonely race to complete the top ten, ahead of the hindered Palou and Gentleman driver Giuseppe Cipriani.