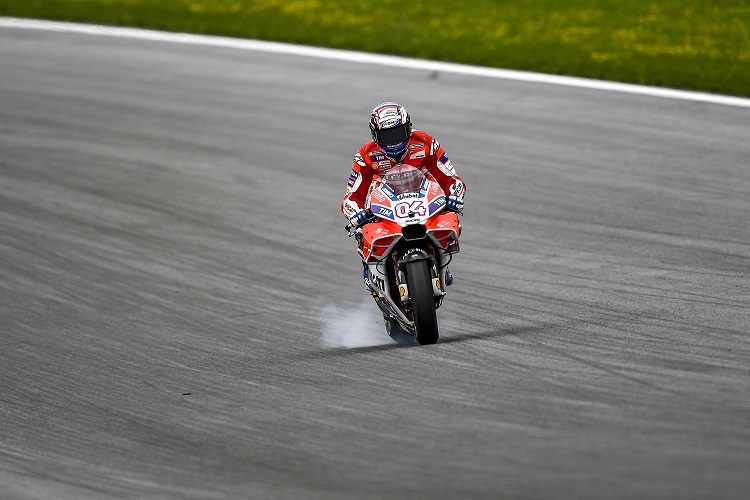 Andrea Dovizioso set the practice pace for the second successive Friday as Ducati power made the difference on day one at the Red Bull Ring. The Italian outpaced Maverick Vinales by a quarter of a second in this afternoon’s second session but with a second covering the top sixteen overall, nobody is assured of a Q2 spot heading into tomorrow.

The day was disrupted by rain with Hector Barbera beating the showers to set the fastest time in the morning, clocking a 1:24.631, and the Avintia rider looked to be sitting pretty when the heavens opened shortly before the start of FP2. With wet patches around the circuit, especially at turn three, the lap times were much slower early in the afternoon but brighter skies led to a qualifying-style conclusion to the day’s running.

With a couple of minutes remaining, Johann Zarco and Jorge Lorenzo were trading fastest times but Vinales powered his way to the top, clocking a 1:24.280 with seconds remaining. The last word would go to Dovizioso though with the pre-race favourite chopping two tenths off the Yamaha rider’s time, making the most of the GP17’s top speed in the first half of the lap.

Dani Pedrosa climbed to third late on with Zarco and Lorenzo relegated to fourth and fifth while Barbera’s morning time remained good enough to keep him in the top six. Championship leader Marc Marquez, who predictably set the pace as the track dried out, fell to seventh with Cal Crutchlow and Aleix Espargaro just behind while Scott Redding completed the top for Pramac Ducati.