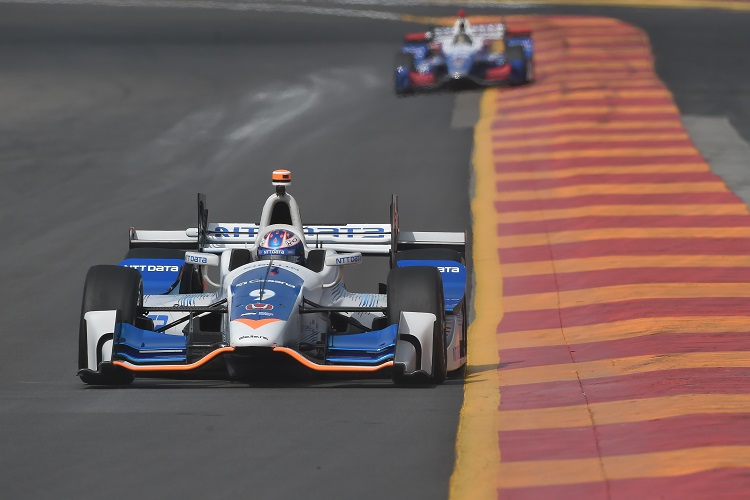 Graham Rahal and Scott Dixon shared the practice honours at Watkins Glen International on Friday as the penultimate weekend of the Verizon IndyCar Series got underway with two practice sessions.

Rahal put his Rahal Letterman Lanigan Racing machine to the top of the time sheets with a best lap of 1:23.2603s in the opening session, ending 0.2083 seconds clear of Andretti Herta Autosport’s Alexander Rossi, while Max Chilton was third fastest for Chip Ganassi Racing.

The second session was the quicker of the two, with Dixon putting his car at the head of the field with a best time of 1:22.6187s, 0.0942 seconds clear of Team Penske’s Will Power, who had finished a lowly sixteenth in the opening session.

Rahal continued his good start to the weekend with third ahead of Pagenaud, while Rossi and Castroneves completed the top six ahead of Charlie Kimball, who suffered a technical issue in the opening session that left him languishing at the rear of the field for Chip Ganassi Racing.

Hunter-Reay and Takuma Sato placed their Andretti cars into eighth and ninth, while championship leader Newgarden completed the top ten ahead of Tony Kanaan and Sebastien Bourdais.

Chilton’s second session did not go to plan, with the Briton losing control of his car in the second part of the Bus Stop complex and hitting the wall with twenty-two minutes remaining, stopping the session briefly while his car was recovered. After being third in the first session, his crash left him down in seventeenth.

Jack Harvey’s first sessions on a road course in IndyCar with Schmidt Peterson Motorsports saw him improve significantly between sessions, with the Briton ending up twentieth in the first session and eighteenth in the second, although he will take pleasure in the second session to finish ahead of team-mate Hinchcliffe.