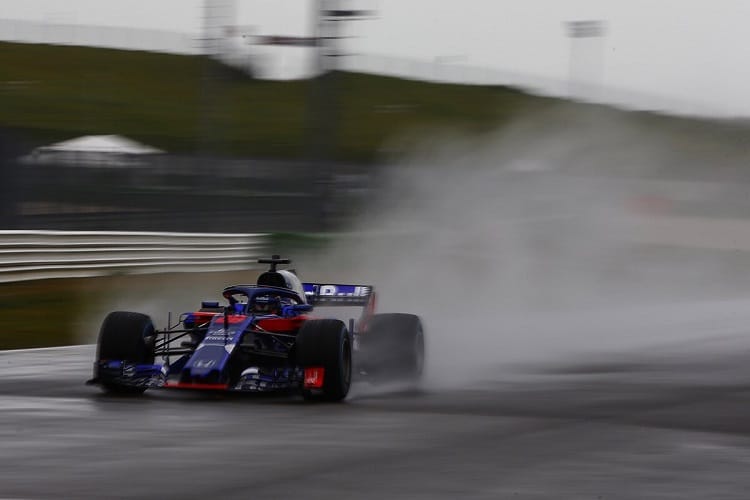 Red Bull Toro Rosso Honda took to the track for the first time with their 2018 machine, the STR13, with Brendon Hartley completing a run out at a wet Misano on Wednesday.

The STR13 has a similar livery to what was seen on the 2017 STR12, and amid a number of aerodynamic changes, the car includes the now-mandatory Halo head protection device for the first time, with the team releasing a first official picture on their official Twitter account.

After a year being powered by Renault, the Faenza-based squad has made a switch to Honda power in 2018, going in the opposite direction of the McLaren F1 Team, and will field entries for two-time FIA World Endurance Championship winner Hartley and 2016 GP2 Series champion Pierre Gasly.

Neither driver scored points in their time in the STR12 in the closing races of last season, with both suffering multiple grid penalties as they suffered with Renault mechanical issues, but will be eyeing their first top ten finishes with Honda powered when the season gets underway in Australia next month.

The official launch of the STR13 takes place next Monday at the Circuit de Barcelona-Catalunya ahead of the first pre-season test of the season.

By Paul Hensby
3 Mins read
Mercedes stand-in George Russell topped his second consecutive practice session under the floodlights around the outer track of the Bahrain International Circuit on Friday.
Formula 1

By James Thomas
3 Mins read
Free Practice One for the long-awaited Sakhir Grand Prix has officially concluded, and it was George Russell who was fastest on his Mercedes debut.
Formula 1Formula 2

By Paul Hensby
2 Mins read
Guenther Steiner expects Nikita Mazepin to do enough this weekend in Bahrain to ensure he earns a Superlicence to race in Formula 1 in 2021.