The 2018 FIA Formula 2 Championship got underway at the Bahrain International Circuit this past weekend, and Formula 1 juniors took centre stage, but the inability of drivers to get their Mecachrome-powered Dallara’s off the grid and tyre management were the bigger talking points.

The grid has no fewer than nine drivers with direct relations with Formula 1 teams, and it was two of those drivers, McLaren F1 Team’s Lando Norris and Renault Sport Formula One Team’s Artem Markelov who claimed the two race victories.

Norris’ first race weekend with Carlin Motorsport was stunning, grabbing pole position and leading home a team one-two from Sergio Sette Camara in the Feature race, while he claimed fourth place in Sunday’s Sprint race despite a midrace issue with his engine that cost him time and briefly track position to Luca Ghiotto.

Markelov, starting his fifth consecutive season with Russian Time, started the Feature race from the pit lane after stalling ahead of the original start, but his sublime tyre management skills saw him storm through the field, and only missed out on second place by three-tenths of a second after duelling with Sette Camara during the final few laps.

The Russian showed similar prowess on Sunday to claim his sixth Formula 2 victory of his career, but for others, in both races, they were left compromised at lights out.

Markelov was not the only one to fail to start on the grid on Saturday, with MP Motorsport’s Roberto Merhi failing to start altogether after an issue, but Sunday saw no fewer than four drivers struggle to get away, with the new-for-2018 Dallara F2 2018 proving a difficult beast to get off the line.

One of the most disappointed drivers on Sunday would have been Sean Gelael, who was unable to get off the line ahead of the formation lap from second on the grid, while Nicholas Latifi also joined him in the pit lane for a similar issue.

The race start itself saw ART Grand Prix’s race capitulate, with both George Russell and Jack Aitken both being left on the grid, as did Trident’s Santino Ferrucci, but questions must be asked to why so many drivers struggled to get going.

The other talking point was how drivers dealt with tyre management, and it seemed that it didn’t matter if you were a rookie or an experienced racer, if you didn’t get it completely right, you were going to fall off the proverbial cliff before the end of the race.

Markelov has long been the master of tyre management, and he proved that in both races, while the likes of Norris, Sette Camara and Maximilian Gunther also showed themselves as proficient at keeping life in their tyres, while the likes of Nyck de Vries, Louis Delétraz and Antonio Fuoco, all in their second seasons in Formula 2, dropped back.

In fact all three attempted a pit stop during the Sprint race, a tactic that Charles Leclerc attempted in 2017 to a dramatic effect, with de Vries giving up the lead in order to switch compounds.  Unlike in 2017, the tactic did not pay off, and the Dutchman was unable to better fifth, but after struggling on Saturday, maybe it was a fifth place earned rather than a race win lost in this instance.

Not many tracks on the Formula 2 calendar will have such an abrasive surface, but Bahrain proved that tyre management will be key to having a good season – providing you can get off the line! 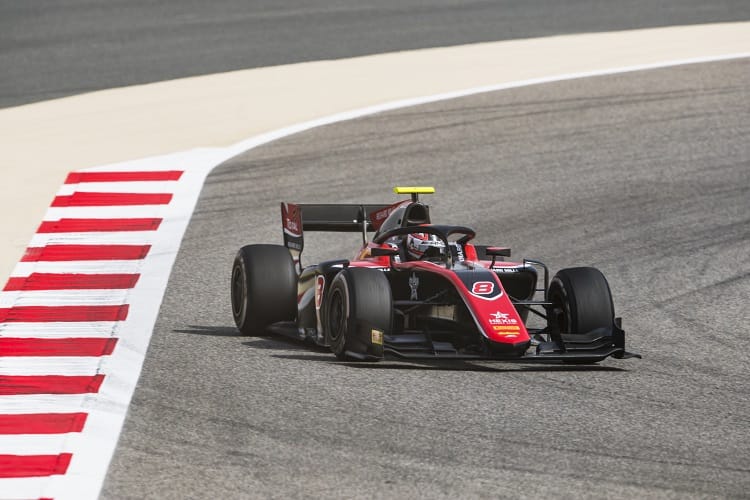 George Russell had a lonely race after stalling on the grid – Credit: Zak Mauger/LAT Images

By Fergus Mckie
3 Mins read
In a relatively calm Formula 2 Sprint Race 2 at Monza, Jehan Daruvala took his first win of the season and a second of his caree
Formula 2

By Fergus Mckie
2 Mins read
Oscar Piastri became the first repeat polesitter of the season with Daruvala roundign out the top ten ahead of Guan Yu Zhou.