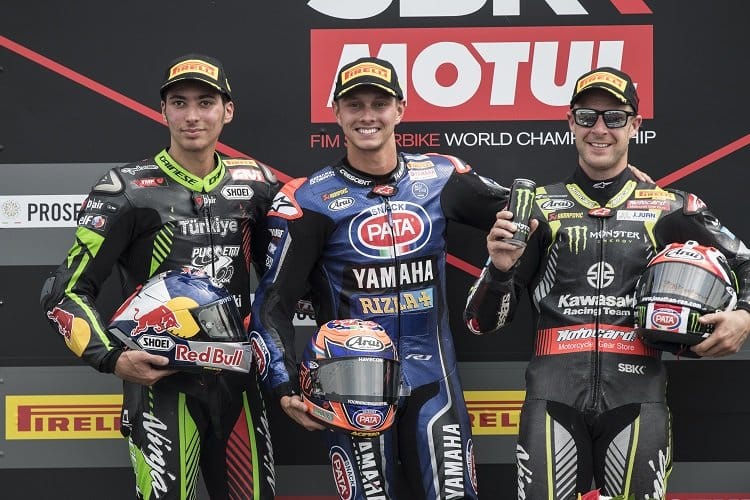 Michael van der Mark followed up his maiden WorldSBK victory at Donington Park on Saturday with a stunning win from ninth on the grid in race two. The Dutchman emerged the winner from a thrilling three-way battle with team-mate Alex Lowes and Jonathan Rea, only for the sensational Toprak Razgatlioglu to snatch second with a stunning late rally.

24 hours after seeing van der Mark end Yamaha’s winning drought, Lowes was determined to follow suit from pole position and quickly opened up a 1.4 second lead while his team-mate fought his way through the pack. By one-third distance, Michael had successfully chased the leader down but after a blistering series of laps, Rea had latched onto back of the Yamaha duo.

Lowes’ defence of the lead finally ended six laps from home with Rea muscling him aside into Goddards, while van der Mark followed past at the very next corner. The inspired Dutchman would dive past Rea for the lead at the Melbourne loop next time around to secure the lead before escaping for a sensational second victory of the weekend but the action was far from finished.

The squabbling up front had allowed the chasing pack to close in, a pack that was incredibly being led by Razgatlioglu. The Turkish rookie demoted Lowes to fourth, earning him his maiden WorldSBK rostrum, but not finished there, the Puccetti rider proceeded to outbrake Jonathan Rea into the Old Hairpin on the final lap, earning him second place.

Rea took third ahead of Lowes with Chaz Davies fifth on a disastrous weekend for Ducati. Tom Sykes salvaged sixth after a last-lap pass on Lorenzo Savadori but the Yorkshireman had failed to leave Donington Park with at least one win for the first time since 2012. Leon Camier was eighth for Honda ahead of the sole MV Agusta of Jordi Torres while Loris Baz brought the lone BMW home in tenth.