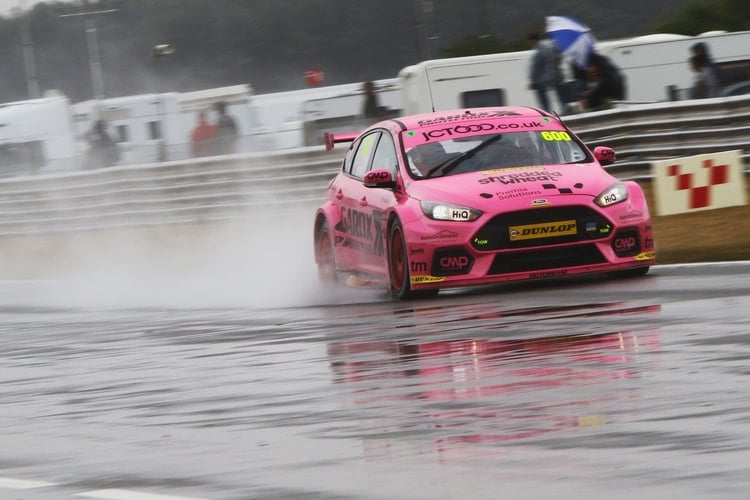 A Dunlop MSA British Touring Car Championship return after the five week Summer break was seen as a chance of improvement for Sam Tordoff and the issues he and his Team GardX Racing with Motorbase Ford Focus RS faced in the first half of the season.

To celebrate sixty years of the championship, Tordoff was running a special all pink livery on his Focus RS, a colour scheme that might be used to see out this current season.

The best average qualifier looked to continue his Saturday form at Snetterton. However, the usual Sunday disappointment was something he was looking to rectify.

Qualifying eighth in the first qualifying session wasn’t up to the usual high Tordoff standards in 2018, then an even more off-colour qualifying in the second session of the day in order to form the grid of the anniversary Diamond Double event saw him set a time in sixteenth place.

With qualifying disappointment behind him, Sam was looking towards the races in order to make light of an off-pace Saturday.

Race one in treacherous conditions saw the Ford man battle with the Alfa Romeo of Rob Austin in order to take seventh. On the fourth lap he made his move into fifth where he would ultimately finish. Another strong finish for the twenty-nine year old.

With the soft tyre and 39kg of ballast in the second race, a slow start saw the Yorkshireman drop a position to sixth. Despite multiple attempts to regain fifth, he was to hold sixth until the drop of the flag. If he was to continue this run of top ten finishes he needed to keep out of trouble for race three.

From sixteenth, Sam’s Focus RS dubbed “The Pink Panther” had managed to get into thirteenth after lap three. However, progress was halted on the fifth lap as contact on the rear of the car damaged the suspension and the unluckiest driver of 2018 had to pull off into retirement.

“We’ve lacked pace this weekend, which is the first time this year and we still don’t know why.” The driver of the six hundred car pondered,

“We were fast in the wet in race 1 and we carried that forward in race 2 in the dry on the soft tyre, but then in the 3rd equal weight race we were nowhere.

“I got a great start from 16th to 11th and it was looking good but I didn’t have any pace in the car so was immediately on the back foot and struggling to fight and then we got contact which broke the left rear and that was the end of that.

“We need to go away and back to the drawing board, we’ve got a test planned this week so hopefully we can put a few things into practice there.

“All things considered, 5th and 6th was a good result. Race 3 was more reflective of our pace and unfortunately the damage comes with the territory of being in that mid pack.”